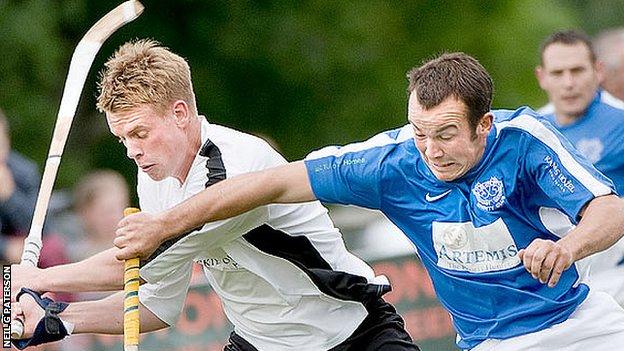 Inveraray added to their remarkable record in the Celtic Society Cup with a 14-0 rout of challengers Taynuilt in the rearranged final at Strachur.

Russell MacKinlay scored four and three players claimed hat-tricks as the Premiership side won the trophy for the 10th time since 2000.

But it is Kyles Athletic who lead the Premiership after their win at Lovat.

MacKinlay, MacPherson and Chris Crawford all scored in the first quarter of the south area championship cup final, which was postponed last week due to rain, McKinlay getting another just before half-time.

A second-half goal rush included three in just six minutes from Ruaridh Graham. MacKinlay increased his tally to four and Euan McMurdo and MacPherson also notched three-goal hauls against the South Division 1 side.

The only years in the sequence when Inveraray have lost out are 2005 and 2011, and the scoreline even dwarfs Kingussie's 12-1 Camanachd Cup final victory against Newtonmore in 1997.

Kyles went back top of the Premiership with a 2-1 away win over Lovat.

The postponement of leaders Newtonmore's match on Bute meant this game was going to produce a new pacemaker and it was first blood to Lovat through Owen Ferguson on 14 minutes.

Roddy MacDonald squared it just after the restart and John Whyte got the winner on the hour. Kyles now lead 'More, who have a game in hand, by two points with Lovat one more behind.

It's been a difficult season for Kingussie who have drawn blanks in the MacTavish, MacAulay and Camanachd Cups and went a goal down in the league at home to Kilmallie's Liam MacDonald.

But yet again it was Ross to the rescue, the last two or his three strikes coming in the final 15 minutes for a 3-1 scoreline which just about keeps Kingussie on the edge of the league race, six points off the lead but with two games in hand.

Similarly, Fort's talisman Innes, back from injury, produced the goods in their 3-2 home win over Kinlochshiel.

His opener was neutralised by Keith MacRae, his second came on the half-hour and his third was the matchwinner after Duncan Rodger had found his own net. Shiel still keep Fort out of the top half on goals scored.

In contrast to the days of runaway Kingussie victories, just six points separate the top half-dozen clubs with games in hand making the real picture even tighter.

The Balliemore Cup final for the game's intermediate title in Strathpeffer will be an all-north meeting between Beauly and Lochaber on 21 July.

Barrie MacDonald and Sean Stewart both got doubles for Beauly in their 7-2 win against Kilmory while Zands Ferguson, Scott Paterson, Ryan Toal and Ben Delaney all made their mark for Lochaber against Glasgow Mid Argyll.

The Sutherland Cup final for the reserve team championship will be a Badenoch derby in Beauly on 28 July. Newtonmore's second team beat Glenurquhart's 4-1 while it was 1-0 for Kingussie against Fort William.