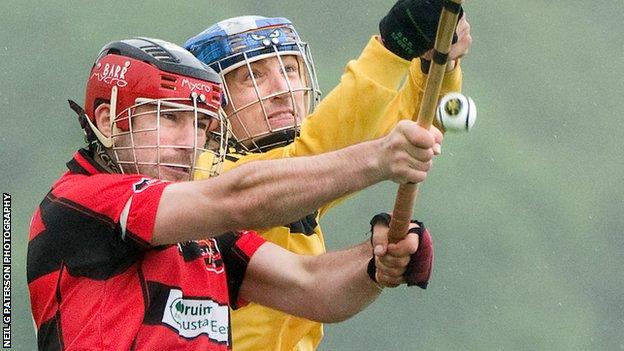 There will be a home presence in the Artemis MacAulay Cup final at its regular venue of Mossfield Park, Oban, on 18 August.

Camanachd, whose departure from the Premiership last season shocked the sport, meet Glenurquhart in the final.

Glenurquhart beat Fort William 3-0 in the north semi-final in Inverness.

Newtonmore's 2-0 victory over Kinlochshiel on the west coast put the champions back on top of the Orion Premiership, where the relegation gloom of Bute and Kilmallie deepened when both lost.

A first-half double from Andrew McCuish sent Camanachd well on their way in the MacAulay Cup's south semi-final, although this was interpolated by an equaliser from Russell McKinlay.

Camanachd's Gareth Evans was sent off for a second yellow card, although the Oban side do appear to be addressing their disciplinary problems and putting their house in order as they also make progress back towards the top league.

The north semi at the Bught drew a blank for the first 45 minutes before David Smart, Ruaridh Cameron and James MacPherson gave the Glen the verdict over Fort's young side.

Newtonmore's Premiership clash with Kinlochshiel was goalless in the first half before John MacKenzie opened early in the second and Danny MacRae put the points in the bag for the champions late on.

Lovat kept up the pressure in third place with a 2-1 away win over bottom side Bute, whose grip on Premier Division shinty becomes ever more tenuous.

Bute did open through Ali Carmichael, but Lovat's usual suspects, Owen Ferguson and Greg Matheson, turned the tide on either side of half time.

Kilmallie's claim on the second relegation place is becoming ever stronger following a 4-0 defeat at home by Kingussie. Barry Dallas found the mark early, Ronald Ross contributed a double and Rory Borthwick completed the job.

Kilmallie only occupy second bottom from Glenurquhart and Inveraray on goal difference, but the other teams have five and six games in hand respectively.

Kyles booked a long trip to Skye for the quarter-finals of the Scottish Hydro Camanachd Cup on 14 July with a 7-1 defeat of Glasagow Mid Argyll in their second round replay.