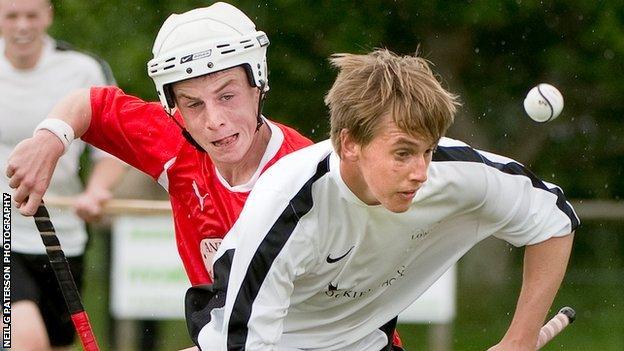 Kinlochshiel, Inveraray and Kyles all booked their places in the semi-finals of the Scottish Hydro Camanachd Cup with wins on Saturday.

The remaining quarter-final, Newtonmore v Lochaber, was postponed due to a bereavement and will be played on 28 July.

Shiel, who have been making a great return to the Orion Premiership, extended their recent form to shinty's major knock-out tournament with a 3-1 defeat of Kiltarlity.

Keith MacRae opened for Shiel just before the half-hour and his brother Finlay made it 2-0 soon after.

Greg Matheson got Lovat back into the game with a penalty early in the second half but Jordan Fraser finalised matters for the west coast team with quarter of an hour remaining.

At Kilmallie, Inveraray went 2-0 up before half-time with goals from Andrew MacMurdo and Chris Crawford.

Ryan Stewart pulled one back for Kilmallie but Crawford got his second from the penalty spot before Michael Rodger made it 3-2, creating an anxious final 17 minutes for the south champions.

Kyles made the long and convoluted trip from Tighnabruich to Portree where they started as favourites and went ahead through Roddy MacDonald after just seven minutes.

But Skye refused to lie down and Iain Nicholson equalised just after the quarter-hour.

Similarly, when John Whyte put Kyles ahead again, Jordan Murchison pulled them level again from the penalty spot. However, Thomas Whyte gave Kyles a vital third advantage just before half-time, providing a platform for Dunkie Kerr and Fraser MacDonald to build up a 5-2 advantage for the visitors.

The draw for the semi-finals will be made live on BBC Radio Scotland at lunch time on Tuesday 17 July.

Bottom side Bute took another step towards what now looks like an inevitable relegation from the Premiership when they lost 4-1 to Glenurquhart.

Glen now appear to have escaped any dogfight for the second relegation place, which looks increasingly likely to go to Kilmallie.

Bute must have sensed a possible lifeline when John Beattie gave them an early breakthrough but doubles from Neale Reid and David Smart gave the points to Glen.

Kevin Bartlett scored the only goal of the game for Caberfeidh at Lochcarron to put the Strathpeffer side top of Marine Harvest North Division 1 but they have played five and six games more than Skye and Lochaber, who trail Caberfeidh by just one and two points respectively.