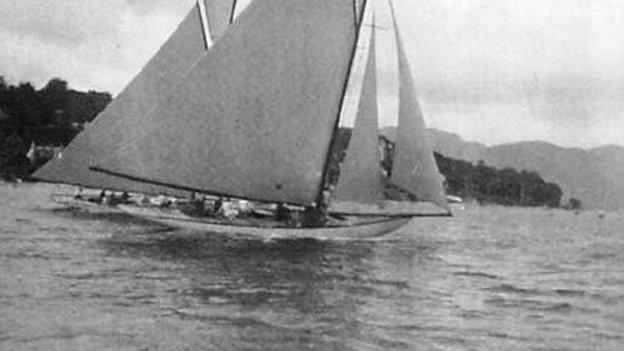 The Fourth Olympiad saw the Clyde being chosen as an Olympic venue and a Scottish boat and crew sailing to gold on home waters.

The Commonwealth Games may be coming to Glasgow in 2014, but in 1908, 12m yacht racing was hosted "in Scotch waters" at Hunter's Quay in Argyll and Bute during mid-August of that year.

Until July of 2012, when Olympic football was played at Hampden Park, this remained the only Olympic event to be staged in Scotland.

At the turn of the century, the Clyde was second only to Cowes on the Isle of Wight in terms of yacht building, sailing and racing.

At the 1908 Olympic Games, the yachting events were held chiefly at Ryde on the Isle of Wight.

There were only two entries in the 12 metre class and both boats in this "fine class" were primarily based on the Clyde.

The British Olympic Council took the decision "to hold matches for them on the Clyde instead of the Solent", rather than have both boats transported south.

There was an international element, the majority of Mouchette's crew being Mersey men, while Hera's crew, without exception, belonged to the Clyde.

At 1130 BST on the morning of 11 August, the two cutters in the class started the first of three scheduled races.

The Mouchette, a Merseyside yacht, was designed by local boatbulder Alfred Mylne and owned by the son of a Scot, Charles MacIver.

Each boat had an amateur crew of 10 and the yachts' owners acted as helmsmen.

Scotland's hopes rested on the Hera, designed by its owner, Thomas Glen-Coats of Paisley, a member of the Royal Clyde Yacht Club.

The first race began at Hunter's Quay, over a 26 mile course via Inverkip, Dunoon and Kilcreggan.

The next day, Mouchette immediately sailed into trouble, finding the Clyde steam yacht, Hebe, anchored in its path.

After a close run in the final heat from Kilcreggan, Hera triumphed by 1m 2s, winning the best of three and avoiding the need for a third day of racing.

Thomas Glen-Coats was a member of the Coats textile dynasty of Paisley, though he is recorded as playing no part in the family business.

The eldest of four sons of Sir Thomas Glen-Coats and heir to the Baronetcy of Ferguslie Park, he was educated at Eton and Merton College, Oxford.

The Coats family's wealth allowed Thomas, Jnr the opportunity to explore his own wide interests.

The family were major benefactors in the area, funding churches, the Coats Observatory and the Fountain Gardens.

Part of the coast of Antarctica is known as Coats Land after an expedition funded by Thomas's brothers, James and Andrew Coats in 1902.

Thomas is recorded as contributing generously to the publishing of scientific results from the expedition.

He succeeded to the baronetcy on the death of his father in 1922 and married in 1935.

His wife, Lady Louise Glen-Coats was a prominent Liberal MP for Orkney and Shetland and is credited with encouraging Jo Grimond to sit as prospective MP for the constituency on her retirement.

The Hera had a long career of sailing after her Olympic triumph until she disappeared off the coast of Argentina in 1950.

The Royal Northern and Clyde Yacht Club continues to thrive. For London 2012, two of their members, Luke Patience and Stuart Bithell, have been selected for the GB men's 470 team.

Sir Thomas Coats Glen Glen-Coats, 2nd Baronet died in Glasgow in 1954 at the age of 75. The baronetcy of Ferguslie Park became extinct on his death.

Other Scots who won gold in 1908 included Arthur Robertson and Wyndham Halswelle on the track.

George Cornet and Angus Gillan each won the first of their two golds in London in 1908.

The Hera and Thomas Glen-Coats may now have slipped from memory, but they were the first in a long line of Scots sailing successes.