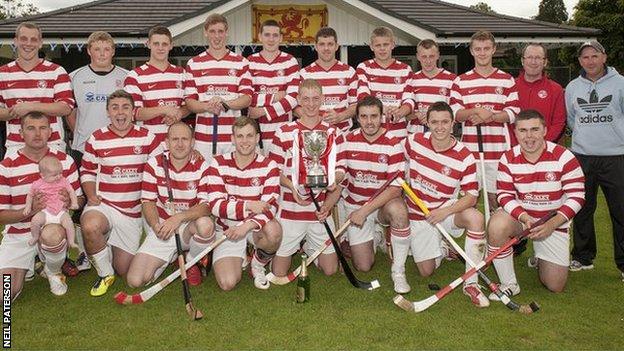 Newtonmore top the Orion Premiership thanks to a 5-2 victory away to Kyles, who drop to third as a result of Lovat's 3-1 victory over Fort William.

The two relegation places look certain to be filled by Bute and Kilmallie.

Bute were beaten 5-0 by Kingussie while Kilmallie lost 7-1 to Inveraray.

Lochaber clinched the first piece of national silverware with a 5-1 victory over Beauly in the Balliemore Cup Final for the game's intermediate championship.

Kyles got off to a dream start in the top of the table encounter at Tighnabruaich when Dunky Kerr put them ahead after just 11 minutes.

But then disaster struck when Newtonmore took command with a Calum Miller own goal, and then it got worse for Kyles.

Danny MacRae put More ahead just before half time and they extended this early in the second half when MacRae converted a penalty.

Kerr then tightened it to 3-2 but another MacRae penalty three minutes from time and a last-minute goal from Calum Stewart rounded it all up.

However, Kyles' coach James Perlich doesn't think the league race is over.

"After getting the opening goal we were unfortunate to concede an own goal and then two penalties but it's just two points and there's five games to go so it's definitely not the end of the league today," he said.

Lovat's 3-1 home win over Fort William, which put them second ahead of Kyles, came from a goal in each half from Greg Matheson followed by one from Owen Ferguson, before Steven Stewart got Fort's consolation.

Relegation now almost certainly beckons Bute and Kilmallie who have also played more games than Glenurquhart and Inveraray immediately ahead of them on points.

Bute went to Kingussie and conceded in the first minute to Ronald Ross but Stuart Downie, Ryan Borthwick, James Hutchison and Lee Bain made the final score 5-0.

Meanwhile, the roof fell in on Kilmallie at Inveraray to the tune of 7-1.

Chris Crawford opened for Inveraray but Mark Graham then had Kilmallie even for quarter of an hour in advance of Crawford completing his double which was then matched by Gary MacPherson and Russell McKinlay with Euan MacMurdo also chipping in one.

Glenurquhart edged towards safety with a 3-2 away win over Kinlochshiel. Neale Reid got a double for Glen whose other scorer was Fraser Heath. Finlay MacRae briefly had Shiel level and an Andrew Corrigan own goal also gave them unfulfilled hope for the last half hour.

In the Balliemore Cup final at Strathpeffer, Beauly opened through Jack MacDonald but Lochaber were too strong and Sean Nicolson equalised before doubles from Stuart Callison and Ben Delaney sent the cup to Spean Bridge.

Oban Camanachd maintained their 100% record in South Division 1 with a 6-1 home win over Strachur but Glenorchy, who have played three more games, kept their two-point lead when they beat Glasgow Mid Argyll 3-1 away.