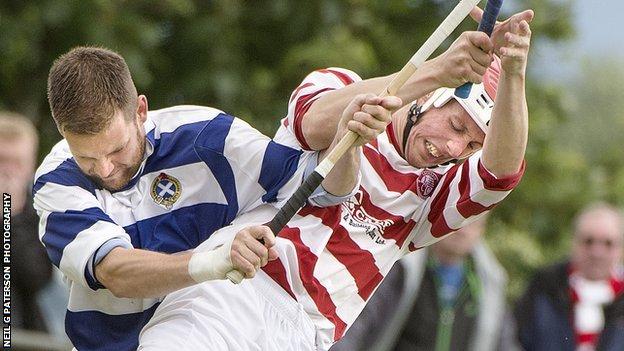 A great day for Newtonmore reached a climax when the Badenoch club's reserves won the Aberdein Considine Sutherland Cup final hours after the first team had progressed in the Camanachd Cup.

Kingussie also hosted the game after a late change of venue and fell 3-0 behind as Calum Stewart and an Evan Menzies double put 'More in command.

Bob MacGregor struck back for Kingussie but Stewart got his second a minute later to make it 4-1 at half-time.

Savio Genini got another for resurgent Kingussie and Michael Clark made it 4-3 before Menzies completed his hat-trick but John Gibson's late response made for a tense finale.

The only goal of the quarter-final came just before the hour from Fraser MacKintosh and set up a last-four meeting with Kyles in Oban on 11 August.

Newtonmore also remained top of the Orion Premiership as Lovat failed to capitalise on the leaders' league inactivity.

Locat went down 4-1 at Inveraray with Russell MacKinlay opening for the hosts. Greg Matheson equalised but MacKinlay's second and two in four minutes from Gary MacPherson and Neil Campbell ensured victory for Inveraray.

Kyles drew level on points with Newtonmore but trail on goal difference following a remarkable 6-3 home win over Glenurquhart.

Ewen Campbell, David Zavaroni and Roddie MacDonald saw Kyles 3-0 up after just 11 minutes but a James MacPherson hat-trick had Glen level by half-time.

Robbie MacLeod edged Kyles ahead and a late Fraser MacDonald double clinched it for the home side.

A 1-1 draw at home to Fort William delayed the numerical certainty of relegation for Bute. Robert Ferguson scored first for the island side but Alan Knox got Fort's late equaliser. The other strong favourites for the drop, Kilmallie, had no game.

Oban Camanachd are top of Marine Harvest South Division 1 following a 3-2 victory at Strachur which maintained their 100% record. They have goal difference advantage over Glenorchy, who lost 2-1 at home to Taynuilt and Glenorchy have also played three games more.