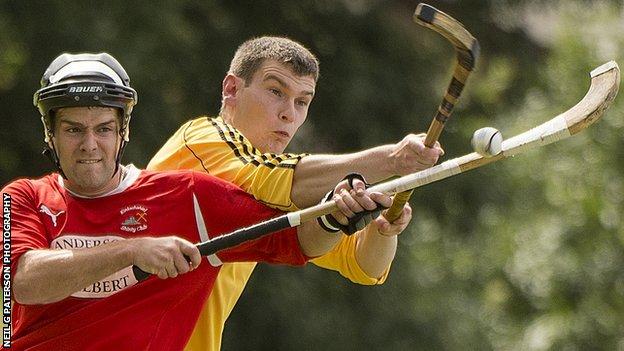 Inveraray won through to the final of the Scottish Hydro Camanachd Cup with a 3-1 victory over Kinlochshiel in the first semi-final at An Aird Fort William.

They will meet either Kyles or holders Newtonmore in the final in Oban on 15 September.

Kyles went two points clear at the top of the Premier League with a 3-1 win over Fort William while Kingussie's 1-0 home defeat by Glenurquhart dented their receding hopes of the title.

And shinty's Behaviour in Sport committee will now decide whether Newtonmore can hold on to the Sutherland Cup amid allegations that they fielded an ineligible player during the campaign.

Gary MacPherson put Inveraray ahead in the first minute in the Camanachd Cup semi final, which was the first game at An Aird Fort William following a year-long upgrade.

It was early in the second half before MacPherson netted what turned out to be the decisive goal.

Fort William's Black Park hosted the early throw up in the Orion Premiership, where Roddy MacDonald opened early for Kyles and Thomas Whyte made it 2-0.

Alan Knox pulled one back for Fort William but Fraser MacDonald put the issue beyond doubt early in the second half.

Glenurquhart manager Drew MacNeil has been frustrated this season at missed penalties so, when they got one right on half time against Kingussie at the Dell, he handed the hit to keeper Stuart MacKintosh.

The goalie calmly beat his opposite number to score the only goal of a game which guarantees Glen safety from relegation and dents Kingussie's hopes of the title.

Glen now also move into the top half of the table.

In Marine Harvest North Division 1, favourites Lochaber suffered a setback on Skye with a goalless draw.

And, in similar fashion in South Division 1, Oban Camanachd could only draw 3-3 at home to Taynuilt, which also means they lose their 100% record.

Shinty's Behaviour in Sport Committee will now decide whether or not to strip Newtonmore of the Sutherland Cup, the sport's reserve team championship, following allegations that they fielded an ineligible player in the final on 28 July, where they beat Kingussie 5-4.

It has emerged that 17-year-old Calum Stewart had played more than the regulation five first team games allowed for a reserve team player in cup competition, and the rules provide for a £25 fine and the offending team to forfeit the tie.

There is the further complication that Stewart may have exceeded the five-game limit by the time of Newtonmore's 4-1 semi-final win over Glenurquhart.

So, if the committee find that Newtonmore have infringed the rule, they could be faced with the options of awarding the cup to Kingussie or ordering a fresh final between Kingussie and Glenurquhart, unless some other sanction is decided upon.