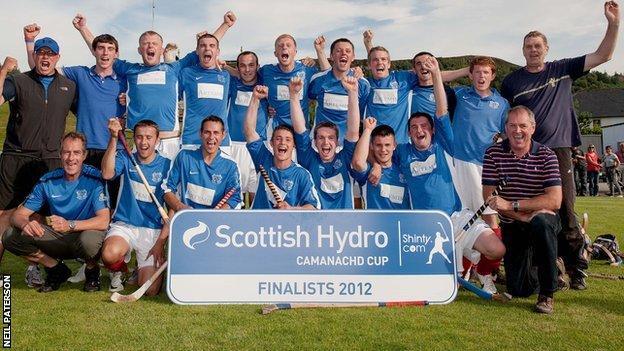 Oban's Mossfield Park will host the first all-South final of the Scottish Hydro Camanachd Cup since 1983, and only the second ever, when Inveraray meet Kyles Athletic on 15 September.

This follows Kyles' 2-1 victory over holders Newtonmore in the second semi-final, again at Oban, on a day when Bute were relegated from the Premiership and Lovat missed out on a chance to go second.

Thomas Whyte sent Kyles on their way just after the half hour and there was more joy for the Tighnabruaich side when Roddy MacDonald made it 2-0 after 42 minutes.

But it was game on straight away when Danny MacRae got one back just before half-time, although the fightback ended there and in the second half it was Kyles who had a goal disallowed.

Lovat would have gone second in the Orion Premiership with a derby win away to Glenurquhart, but lost 3-1 despite grabbing an early lead from Greg Matheson.

Then, before half-time, Ruaraidh Cameron twice and David Smart got Glenurquhart the goals which have put them into the top half of the table.

It's South League shinty for Bute who have been relegated from the Premiership following a 5-1 home defeat by Inveraray.

There were first-half doubles from Ruaraidh Graham and Gary MacPherson and Chris Crawford contributed early in the second before Graham Fisher scored for Bute.

In a remarkable game at Black Park, Fort William came back from 3-0 down to beat Kingussie 4-3.

Barrie Dallas and a Fraser Munro brace gave Kingussie what looked like a winning lead in 24 minutes. But Alex Duncan replied with one on either side of a strike from Bryan Simpson in advance of Gordy MacKinnon's winner on 65 minutes.

A 4-1 home win for Skye over Beauly kept them top of Marine Harvest North Division 1 but Lochaber's 6-0 eclipse of Strathglass at Spean Bridge keeps them four points adrift but with three games in hand.

A 20-month ban for Camanachd's Matt Rippon following an incident involving referee Innes Wood during their Balliemore Cup tie against Lochaber on 26 May is expected to be discussed at a Camanachd Referees' Association meeting on Sunday 12 August.

Camanachd's interim manager Gus Campbell, who took over from Diarmid MacMillan, is an association member and has told BBC Scotland that he won't be attending the meeting due to a possible clash of interest. MacMillan also received a six-game ban following the same incident.

And the Camanachd Association are on the point of confirming a date for the Behaviour in Sport committee meeting to consider allegations that Newtonmore's Calum Stewart was ineligible to play in the Sutherland Cup final for the game's reserve championship two weeks ago.

Possible sanctions include stripping Newtonmore of the trophy.