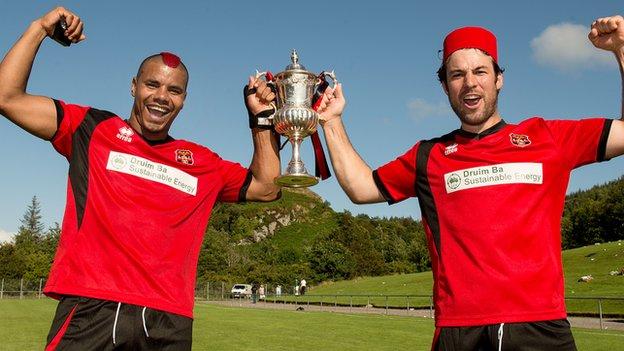 Glenurquhart manager Drew MacNeil kept his players out of touch with friends and family in the run up to the Artemis MacAulay Cup final in Oban where they beat Oban Camanachd 6-0 to lift their first ever national senior trophy in the Drumnadrochit club's 127-year history.

But, as Glen triumphed, Kilmallie were relegated from the Premier League on a day when there were also high scoring victories for Fort William and Kinlochshiel.

MacNeil was desperate to get his side to focus totally on the final against the South Division 1 leaders, so he ordered them to switch off their mobile phones on the bus during the 120-mile trip to Mossfield Park.

And the strategy worked as Glenurquhart never looked back after Rhuaraidh Cameron opened the scoring after just six minutes.

Neale Reid added another and these two players then completed their doubles to build up a 4-0 lead within the hour.

Then, in the last 10 minutes, teenager Fraser Heath, who was singled out for special praise by the manager, and Lewis MacLennan completed the job.

Single club domination of shinty, principally by Kingussie, has been on the wane for some years now, and Glenurquhart's triumph continues the process of a more even sharing of honours, with several clubs able to beat each other, which has been seen in recent seasons.

Kilmallie have been formally relegated from the Orion Premiership following a 3-1 defeat at home to champions Newtonmore, who went back top in goal difference ahead of Kyles who have played an extra game.

Glen MacKintosh opened early for 'More and Liam MacDonald equalised before MacKintosh and Danny MacRae completed the job early in the second half.

A Duncan Rodger hat-trick and a Daniel Stewart double did it for the Fort while Euan MacMurdo, Chris Crawford and Stuart Robertson scored for Inveraray.

Kingussie's woes continued with a 6-1 defeat away to Kinlochshiel who have already beaten them in the league and put them out of the Camanachd Cup.

Gordy MacDonald put Shiel ahead in the first minute and Barry Dallas had Kingussie briefly level before Keith MacRae and John MacRae both piled in with doubles, split by one from Connal Fraser.

Newtonmore have confirmed that they will not appeal shinty's Behaviour in Sport committee's decision to strip them of the Sutherland Cup for fielding an ineligible player and order a fresh final between Kingussie and Glenurquhart.

Club secretary Ian Gibson has told the BBC that they have admitted to what was an honest mistake.