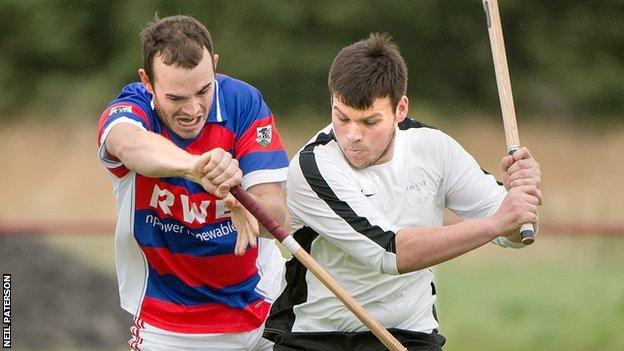 There were victories for the top two in the Orion Premiership but the points arithmetic puts Newtonmore a step closer to retaining their title.

Lochaber edged a step closer to Premiership shinty with a defeat of Beauly in North Division 1, while the area reserve team championships have gone to Beauly and Lochside Rovers.

Defending Premier champions Newtonmore won 2-0 away to relegated Bute with one in the first half from Ackie MacRae and the other late on from teenager Calum Stewart.

Meanwhile, it was 3-1 for Kyles at home to Kinlochshiel, but not before the visiting team opened through Keith MacRae on the quarter hour.

Roddy MacDonald equalised on the half hour and a second half double from John Whyte brought Kyles, who now only have to play Inveraray, level on 26 points with More, who have to meet Glenurquhart twice.

Newtonmore also have a goal advantage of 12 so victory over the Glen at The Eilan next Saturday would all but see them home and dry.

The league encounter between Kyles and Inveraray will not now take place before the two also meet in the Scottish Hydro Camanachd Cup final at Oban on 15 September.

A 1-0 success at Inveraray kept Glenurquhart in contention for third place, ironically thanks to a 24th minute penalty from keeper Stuart MacKintosh as a season of missed hits from the spot for the Drumnadrochit side approaches an end.

Three straight wins in a league which is very tight in the middle have transformed Glenurquhart who were not far above the relegation zone five weeks before.

Rory MacGregor and youngster Savio Genini gave Kingussie a 2-0 lead at home to Lovat, who are the other contenders for third place, but that only lasted four minutes when Owen Ferguson then Calum MacAulay tied up the game at 2-2.

A 4-2 home with for Lochaber over Beauly, which included a Zands Ferguson double, edged the Spean Bridge team just a point behind Marine Harvest North Division 1 leaders Skye and Lochaber have two games in hand.

Skye's match at home to Strathglass was postponed minutes before the start on a day of four postponements when the weather bit back.

And the area reserve championships were also decided, Beauly beating Fort Willam 3-1 for the Strathdearn Cup in the north and Oban Camanachd's reserves Lochside Rovers overwhelming Ballachulish 6-2 for the Bullough Cup, the south title.