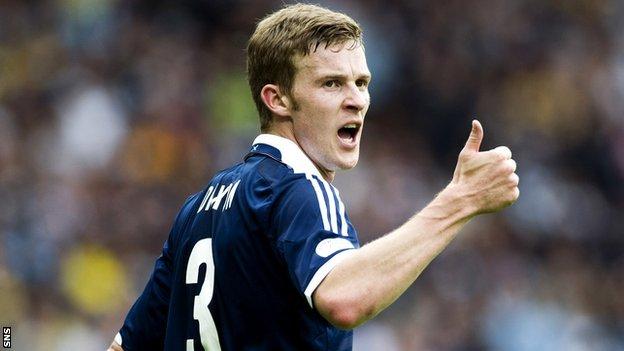 Scotland left-back Paul Dixon accepts that three points against Macedonia on Tuesday are vital to stay in contention to qualify for World Cup 2014.

Dixon made his debut against Serbia having been called up to the squad following the withdrawals of Danny Fox, Russell Martin and Charlie Mulgrew.

The Huddersfield man is hopeful he has done enough to keep his starting place.

"I think we do need to get three points, especially with it being at home," he told BBC Scotland.

"We kind of need to take advantage of our home games."

The former Dundee United defender capped an impressive debut by being named man of the match against the Serbs, but feels he will be in for another hard match against Macedonia.

"It's going to be just as hard again on Tuesday. You've seen Macedonia went to Croatia and only got defeated 1-0 and Croatia are one of the favourites for the group.

"So, it's going to be tough but we've just got to focus on getting the three points and I'm sure we'll get goals on Tuesday night."

Dixon's former boss at United, the Scotland assistant manager Peter Houston, said last week that four points from the first two games would be a "good start" and Dixon agrees.

"It would be a draw and a win. At least it's not a defeat. We need to stay away from defeats and as long as we do that, we should be fine."

Dixon played down the suggestion that the additional day's recovery for Macedonia (who played on Friday night) would work to their advantage.

"They've had to travel to Croatia and now to Scotland, whereas we're at home both games," he added.