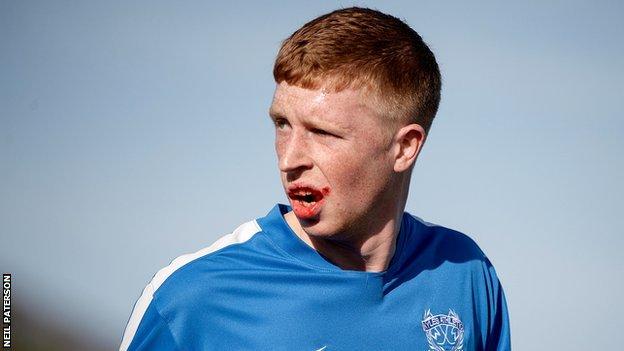 The first all-South final in 29 years swung fom end-to-end as both sides threw caution to the wind.

Inveraray held a 4-2 advantage at the break after a dominant first-half display with the wind at their backs.

However, a four-goal haul from man of the match Roddy MacDonald proved key to victory for Kyles.

Inveraray took the lead after only six minutes when Russell McKinlay lashed the ball into the roof of the net from close range.

However, in what was to become the pattern of the match, Roddy MacDonald picked up on a missed clearance by 'Raray keeper Graham MacPherson to tap home an equaliser.

MacDonald then put Kyles ahead when he beat Inveraray's Douglas Dando for pace before slotting the ball past MacPherson.

Chris Crawford then collected a shy from the left before slotting the ball through the legs of MacDonald to put Inveraray back in front.

And a fine goal from McKinlay put Inveraray further ahead when he collected a high cross, dribbled past two defenders and tapped the ball past the helpless MacDonald.

The match then reached a pivotal moment when Kyles' Dunky Kerr went down in the box under a challenge from MacPherson.

Robbie MacLeod took the penalty which bobbled in front of the Inveraray keeper and into the net.

MacPherson then rifled in a thunderous drive from outside the D to restore Inveraray's two-goal advantage.

But Fraser MacDonald, who was exerting more influence in the Kyles attack in the second half blasted home a similar effort to bring the deficit back to a single goal.

And Roddy MacDonald claimed his hat-trick to level the final as the Tighnabruiach side dominated.

With less than 15 minutes remaining MacDonald claimed his fourth with a strike at the near post to give Kyles the lead.

Inveraray pushed hard to find an equaliser, forcing several set pieces in dangerous areas, but, for the first time in the match, a defence stood firm, and Kyles held on for a famous win.