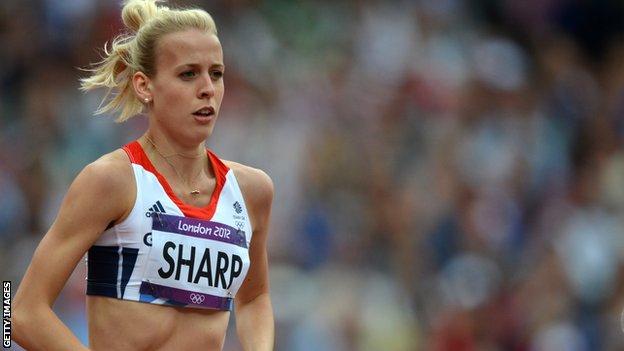 Sharp, who has been named scottishathletics Athlete of the Year, believes her European silver medal this year is a sign of her ability.

But she admits poor training facilities could see her leave Scotland.

"Unfortunately, I have to fight a bit of a battle to use the track at Meadowbank and we only have one in Edinburgh," she told BBC Scotland.

Sharp, who failed to qualify for the women's 800m Olympic final, said that in terms of training facilities she felt the country was split in two.

"I feel like the country is split into two: Glasgow is great. The've got the new indoor arena and the've done up Scotstoun. Then there's the Scottish Institute in Stirling but, apart from that, there's not much in Edinburgh.

"So, it's not always easy but I love being based in Scotland and hopefully can continue to be."

Sharp said she had enjoyed a "whirlwind" time on the track with silver at the European Championships and featuring at the London Olympics.

The Olympics was still an amazing experience

On the Olympics, she said: "It was an unbelievable experience and I'm so glad I was part of it.

"I didn't perform as well as I wanted to in my semi-final but it was still an amazing experience and I'll use that experience at other major championships in future."

Sharp's selection in the 800m for Team GB's athletics squad for the Olympics proved controversial, as she was chosen ahead of four women who had recorded faster times.

"At the time I didn't let it bother me but looking back on it it took a lot out of me," she said. "Followng my heat (at the Olympics) I had to do a lot of media interviews and a lot of the questions were "do you think you've justified your selection".

"Without realising it, I was quite mentally tired from my semi-final and a huge weight had been removed from my shoulders by getting through.

"Maybe I didn't realise how tired I was."

Sharp aims to clock a time below two minutes for the 800m, adding: "Everyone says that if you keep that number in your head then it's not going to happen.

"If you just forget about it and run, then it'll come. I thought I would've done it this year but unfortunately, I had six weeks out in January so I was a wee bit behind in my training.

"But I've still had a great year; I've got half a second to go."