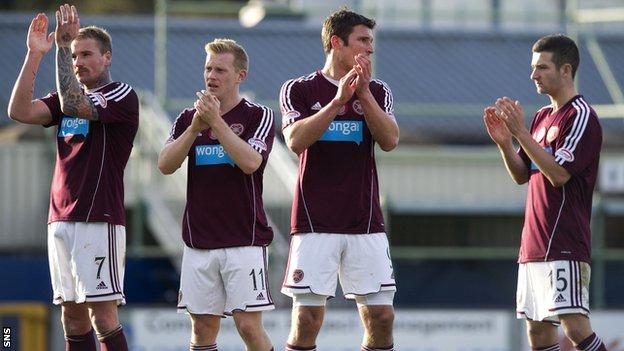 Hearts boss John McGlynn has admitted he cannot guarantee next week's game against St Mirren will go ahead.

The Tynecastle club have been issued a winding-up order by HMRC over an unpaid tax bill of £450,000.

"If HMRC wind us up before that, then no," he said. "That is the case. No-one's hiding from that but we've got to get that game on - time will tell."

The former Raith Rovers manager conceded the club has not been in such a severe financial predicament before.

"I think everyone realises that this is drastic," he said.

"Whether you're the manager or a fan, you understand that this is a very, very critical situation that hasn't happened in the past to this extent, so it is more concerning."

Fundraising amongst various fan groups and organisations has been underway since last Wednesday.

"Who knows what's going to happen this week," said McGlynn. "The fundraising that's been going on has been enormous, so if that continues maybe the players will get paid in full. Anything is possible.

"We're nearly half way there so if we all pull in the same direction and stand firm, we will get there.

"We stay professional and we plan for next Saturday."

Hearts are without a win in their last three league matches and rescued a late point at the Caledonian Stadium courtesy of a 90th minute Marius Zaliukas penalty.

The Lithuanian stepped up to convert the kick on his 29th birthday after Owain Tudur Jones had fouled Callum Paterson.

It was Jones' who had earlier put the home side in front, the Welshman netting an impresssive 25-yard strike after being set up by Andrew Shinnie in the 19th minute.