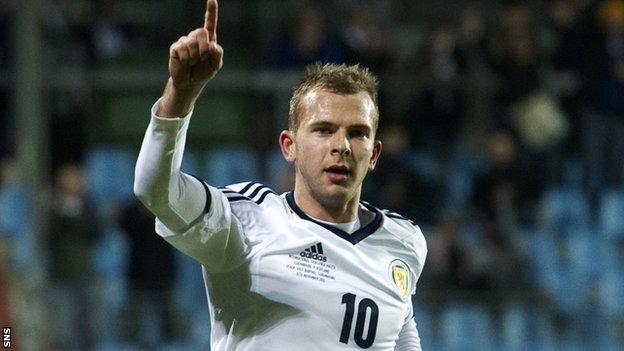 A Jordan Rhodes brace earned Scotland a much-needed victory, but Billy Stark's side were made to work hard for it by the part-timers of Luxembourg.

Rhodes headed in his first after only 10 minutes and doubled his tally 12 minutes later with a tap-in.

The Scots were excellent in the first 45 minutes, but Lars Gerson fired home a free-kick early in the second half to change the tone of the match.

Luxembourg dominated the latter stages but could not find an equaliser.

It meant Stark's first, and perhaps only, match as interim manager ended in victory.

Worryingly, though, the team ranked 144th in the world caused Scotland plenty of problems - underlining the fact a new manager has plenty of work to do.

Nonetheless, there was a good deal to please the Scotland supporters who braved the cold with a good deal of positivity shown by Stark's side at the outset.

The Scots quickly developed a dominance of possession and should have taken the lead after eight minutes with their first real opportunity.

But that only delayed his and Scotland's opening goal by a couple of minutes.

Paul Dixon swept in a cross from the left that was not dealt with by Blaise, whose handball was rendered irrelevant as Rhodes headed in off the post.

Matt Gilks was called into action for the first time just after the quarter-hour mark, as Mario Mutsch headed into the goalkeeper's arms from a Tom Schnell cross.

Mutsch, looking the home side's most gifted player, lashed a shot just wide from the edge of the box moments later, with the Scots defence guilty of allowing Luxembourg too much room at times.

But that was soon forgotten as Rhodes poached another goal, having himself been involved early in the move.

When Andrew Shinnie flashed a shot across goal, goalkeeper Jonathan Joubert could only knock it into the path of the predatory Rhodes for a simple tap-in.

Scotland were putting together some promising passing moves, with the two early goals raising the confidence that had taken something of a battering in the World Cup qualifiers.

Kenny Miller was looking particularly sprightly, relishing the opportunity to link up with a fellow striker.

However, Luxembourg should have had a goal back just before half-time when Mutsch's cross found Charles Leweck in plenty of space but his shot from 18 yards was comfortably held by Gilks.

Liam Kelly came on in place of Charlie Mulgrew for his international debut at the start of the second half and, unfortunately for the Kilmarnock midfielder, his first involvement was to concede the free-kick that led to Luxembourg getting off the mark.

Gerson curled a beautiful effort over the wall from about 22 yards, evading the outstretched arms of Gilks.

That goal, understandably, lifted the home side and Scotland's first-half attacking fluency was missing in the second period.

Luxembourg felt an equaliser was a possibility and it almost arrived on 72 minutes.

Mutsch delivered a terrific cross from the left that was met by the head of Stefano Bensi, but Gilks just managed to turn it round the post.

Rhodes was denied a hat-trick by an offside flag before Gilks again saved from Bensi.

The Scots held on, but the serious business must now be done off the park with the appointment of a new permanent manager.