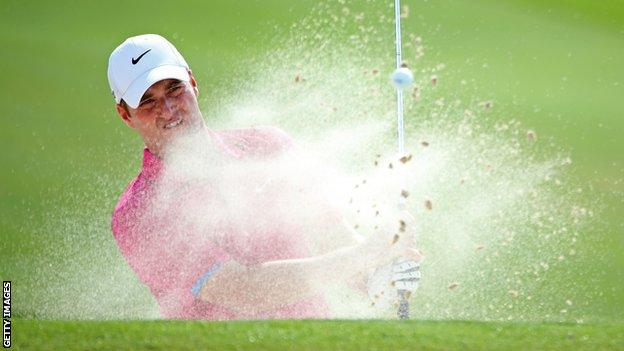 Scotland's Marc Warren is part of a three-way tie for the lead after day two at the World Tour Championship.

The Glaswegian, ranked 189 in the world, shares top spot with the world's number one and two - Rory McIlroy and Luke Donald, respectively.

Warren hit a round of 67 to take his total to 11-under at the Greg Norman-designed 'Earth' course in Dubai.

"It's nice to be the Scot in the pack with the Englishman and the Northern-Irishman," said Warren.

"It's great to be in contention with guys like that and it's a high quality leaderboard.

"The atmosphere here is buzzing already, so I'm looking forward to seeing what it's like tomorrow and Sunday as well."

This is the season-ending event of the European Tour and Warren is one of a six-strong group of Scottish golfers in the Middle East.

The 'Race to Dubai' culminates with this tournament in which the top 60 earners of the golfing season battle for a share of $8m and a $3.75m bonus fund for the top 10.

Warren had a scare when he bogeyed the seventh but quickly came back to birdie the eighth.

"I came back right away and got a flyer out the rough," he said.

"I didn't feel like I was on the back foot at any time, it was just nice to make up for that mistake straight away.

On the back nine I just continued playing good, solid golf."

And the 31-year-old is not phased by the star names alongside him at the top of the halfway standings.

"I look at it and kind of enjoy it really," said Warren.

"I try to force my way to the top of it, but at the same time stay patient and keep doing what I'm doing - if I make a bogey or a birdie then it's down to me, not because of who else is on the leaderboard."

Richie Ramsay is the next best-placed Scot on nine under par, meaning he sits in joint sixth with South African Charl Schwartzel.

"I played nice and steady again," said Ramsay after his round of 68.

"Everyone's chasing birdies so it gets you to play a bit more aggressive.

"When you see the scores coming in, you think everybody must be holing putts or knocking at flags, but I don't think it's as easy the scoring suggests."

Elsewhere, Jamieson is not far off the top with a total of seven under, while Gallacher is just one stroke behind him after day two.

Europe Ryder Cup team member Paul Lawrie is further back on one under par, with David Drysdale on one over.