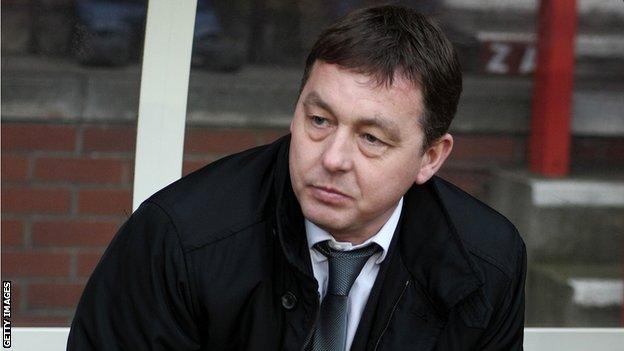 Former Motherwell manager Billy Davies has ruled himself out of the running for the Scotland manager's position.

Davies had been mentioned as a candidate for the job, which became vacant when Craig Levein was sacked in early November.

Currently unemployed, his last coaching role was as manager of Nottingham Forest from 2008-2011.

"I'm not ready for the job. It's not the right job for me at this time," Davies told BBC Scotland.

Davies' began his playing career at Rangers before moving to Elfsborg in Sweden in 1986.

Further moves took the striker to St Mirren and Leicester, before longer stays at Dunfermline and Motherwell, where he finished his playing career.

Davies took over as 'Well manager in 1998, moving to Preston as Craig Brown's assistant in 2001.

Following Brown's dismissal in 2004, Davies became manager at Deepdale before leaving to take charge of Derby County in 2006.

Davies won Derby promotion to England's top flight after a play-off win over West Brom at Wembley, but left in November 2007 with Derby at the foot of the Premiership table.

In December 2008 Davies took the helm at Nottingham Forest where he twice took them to the play-offs before being sacked in June 2011.