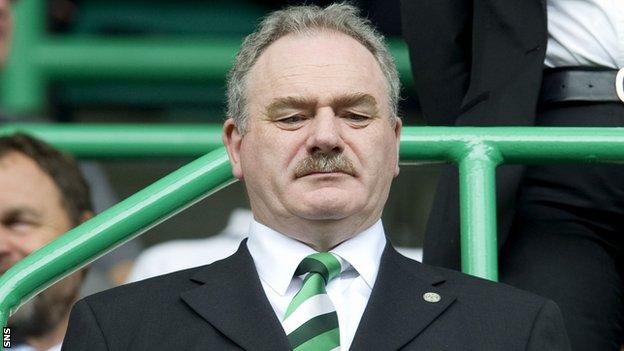 Hibernian chairman Rod Petrie has told the club's annual meeting they may have to cut costs if home attendances do not improve.

"Growing the attendances by supporters is our core strategy," he said.

"We are asking supporters to do what you do best - support the team at home matches.

"If we cannot do that, and if we cannot grow our income, then the only route to get back to break-even will be to make substantial reductions in costs."

"The club is asking shareholders, supporters and everyone connected with the club to play your part in getting back to where we all want it to be," explained Petrie.

They did, however, reach the Scottish Cup final, only to lose 5-1 to Hearts.

This term, Hibs have regularly frequented the SPL's top four and avenged their cup final loss by beating their Edinburgh rivals in the fourth round of this season's competition.

"The way things worked out, the appointment of Colin Calderwood was not a good one," added Petrie. "Mistakes were made.

"As chairman, I take responsibility for that. I am sorry that we have all had to endure two seasons of under-achievement and decline.

"I would also like to thank Pat Fenlon for accepting the post of manager at a particularly challenging time and for attacking the task of rebuilding the squad with conviction.

"Pat himself will tell you that it is still a work in progress as we approach the January transfer window."