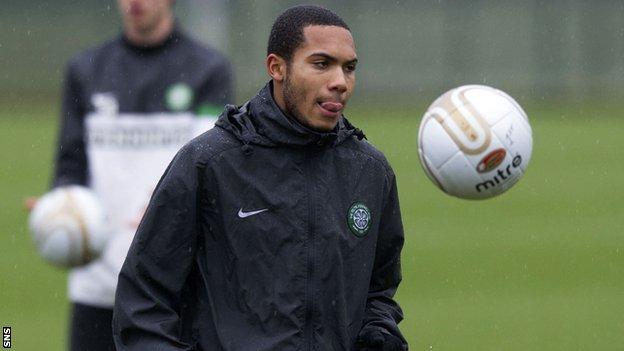 Celtic manager Neil Lennon is considering a move for Kenji Gorre after having the winger on trial.

The 18-year-old Dutchman has been released by Manchester United.

"He has done okay, he is a winger, 18, and he is a development-type player," said Lennon.

Meanwhile, the Celtic boss is hopeful the paperwork can be completed for the loan signing of Trelleborgs goalkeeper Viktor Noring, who was in Glasgow on transfer deadline day.

was pleased with Celtic's January transfer activity, with top scorer Gary Hooper staying in Glasgow despite interest from Norwich City.

"I am delighted that we have kept all our main players," said the manager.

"We have added Tom Rogic, Rami Gershon and hopefully Viktor - we are just waiting on the paperwork coming through - so it has been a decent window for us.

"There was another bid in yesterday [for Hooper], again, an improved offer. I am not going to go into the figures but it was substantial.

"We made our position clear and we stuck to that. I knew what has happening so it wasn't nervy for me.

"It might have been for supporters but there was a lot of rubbish and speculation being bandied about, a lot of nonsense, but I suppose that comes with the fun of it all.

"I wanted him [Doyle] to come in and play with Gary but Wolves were firm on that as we were regarding Gary.

"Kevin knows what the club is about but he is pretty committed with Wolves for the foreseeable future and we respect that."

Georgios Samaras and Emilio Izaguirre were both taken off during Wednesday's 4-1 win against Kilmarnock and Lennon is hopeful both will be fit for the Champions League matches against Juventus this month.

"It is a small tear for Georgios but we are going to be aggressive with his rehabilitation and our medical people, I wouldn't say they were confident, but they think he has a chance of making Juventus and we are hoping Emilio should be okay," he added.