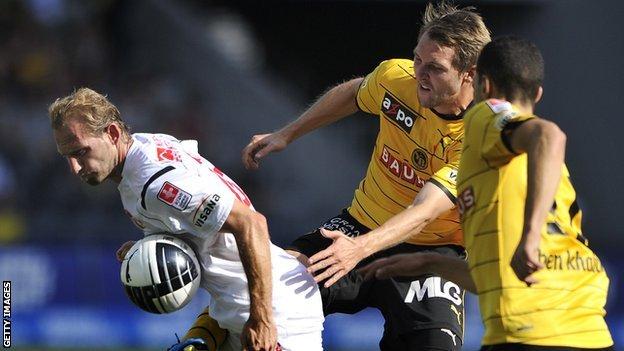 Senior figures in Swiss football have questioned the wisdom of the Scottish game adopting a league structure deemed a failure in their country.

Further talks are planned over

The system was operated in Switzerland for 15 years before changing in 2003.

"Apart from the two or three big clubs, it was not sustainable," said Edmond Izoz of the Swiss Football League.

He was the man ultimately responsible for changing the structure of the Swiss game, which now operates two conventional top leagues of 10, and has spoken to his counterparts in Scotland about the Swiss experience.

The overwhelming feeling among those interviewed by BBC Scotland about the 12-12 model was that it weakened Swiss football, not only in terms of the quality of the domestic leagues but also individual clubs' abilities to compete in Europe and the standard of the national team at all levels.

Equally, the consensus was that the move to a top league of 10 teams had improved all of those areas.

Certainly the national team's Fifa ranking has risen to 13th from a low of 68th in 1998, ten years into the experiment. Switzerland's ranking in European competition has not fluctuated as drastically, but is also now heading in a positive direction.

But crucially, there is an acknowledgement that the decision to do away with the 12-12 was taken principally for the betterment of the game at elite level, with smaller clubs to some extent being asked to accept their status as such.

This is in marked contrast to the Scottish situation, where clubs in the Scottish Football League are demanding greater financial reward and more opportunity to play at the highest level, while the message from the football authorities is that change will be made in the best interests of all 42 clubs.

The Swiss, on the whole, say such a move dilutes the quality of football and warn Scotland to think again.

"The level, the quality of football in Switzerland now, for me, for sure is higher," Fredy Bickel, sporting director of Young Boys told BBC Scotland. "Before with all these small clubs in the league you didn't have the same level."

"There are fewer clubs who are really interesting," added Izoz. "From a technical point of view, for the development and the quality, you need fewer clubs to have good players, that's really important.

And though there was opposition to the reduction in the size of the leagues from smaller clubs, there appears to be a general acceptance that their role is to provide a platform for players to develop rather than covet promotion and a place in the top flight.

"When we don't have enough competition on the pitch we lose quality and our national teams - not only the A team but the youth teams - are not competitive in Europe," according to Stefan Freiburghaus, sporting director with FC Biel, who play in the Challenge League, the second tier.

"So for a country like Switzerland, to form, to educate, to prepare players to become professionals we have to follow this way."

The issue, admittedly, does not appear to rouse passionate debate in Switzerland and no-one interviewed voiced strong opposition to the concept of playing opponents four times a season, a principle bug bear of Scottish football supporters.

Nor do fans feel their opinions go unheeded.

"I don't think they are ignored because several newspapers are really interested in what people think and the board of the national federation are also interested in what the public thinks," Marc Widmer, a Swiss supporter told BBC Scotland.