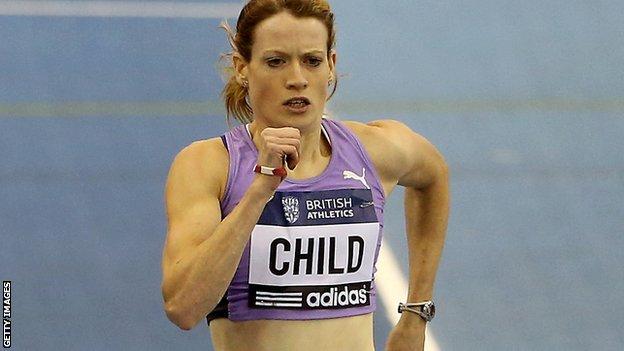 Eilidh Child and Laura Muir are in the Great Britain and Northern Ireland team for next month's European Indoor Championships in Sweden (1-3 March).

Muir made her GB debut in Glasgow in January.

Child's latest indoor run in Birmingham at 51.50 seconds was the fourth fastest all-time by a British woman.

Lynsey Sharp, who won a silver medal at the European Championships in Helsinki last summer, opted not to compete indoors this year despite setting the required standard and will turn her focus to outdoors as she targets 800m at the World Championships in August.

She won the Scottish cross country title a year ago this week at Under-20 level and then went to the World Juniors at 3000m.

"I'm delighted to be heading to Gothenburg and it will be good to have Eilidh Child there on the team as well," said Muir, the only British woman named at 1500m.

"I won the UK title in Sheffield and had the qualifying time from a previous race in Vienna so knew I had done enough. I could relax a wee bit and didn't need to race in the Birmingham Grand Prix.

"I was due to run in the Scottish Cross Country Champs at Falkirk on Saturday but even though I love that event it is better not to risk anything so close to Sweden. I plan to be there to cheer on my friends and my brother.

"After that it is Gothenburg and then I will try and fit in warm weather training ahead of the outdoor season. I have to do a certain amount of work experience to complete as part of my course but it is over a two-year period. I did the lambing last spring and really enjoyed that."

Full-time athlete Child has been in fine form indoors as the hurdler works on her speed via the 400m flat - breaking the Scottish Native and Scottish Indoor records in the process.

The 25-year-old from Perth won a silver medal at the 2010 Commonwealth Games and reached the semi-final stage at last year's Olympics.