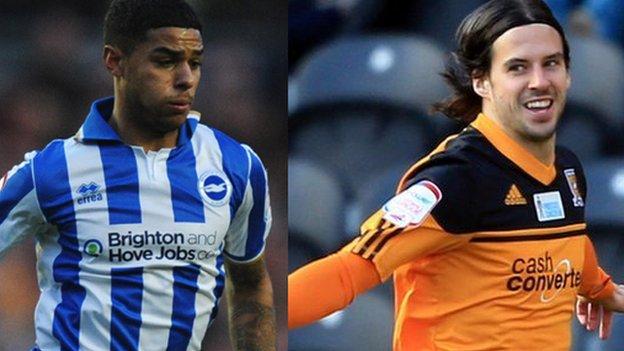 Gordon Strachan has named three players who will be in a senior Scotland squad for the first time.

Gary Mackay-Steven, George Boyd and Liam Bridcutt are now in contention to feature against Wales and Serbia in the World Cup qualifiers on 22 March and 26 March respectively.

Connoisseurs of Scottish football should already be very familiar of what Mackay-Steven can bring to the table.

However, Boyd, and particularly Bridcutt, might have more than a few members of the Tartan Army heading for the internet search engines.

Strachan likes this 23-year-old midfielder because of his ability to break up opposition attacking moves and then initiate the same for his own team.

That happens to be Brighton & Hove Albion at the moment, who are currently flying high in the Championship under manager Gus Poyet.

Bridcutt, who's eligible for Scotland through a grandfather from Edinburgh, is virtually an ever-present for the Seagulls, having played in 32 of their 35 league games in 2012/13.

He's a midfielder definitely better-known for his tackling than his goal-scoring. Bridcutt has scored twice since moving to Brighton in 2010, and both came in his first season there.

His yellow card count requires a few more fingers. With 10 bookings to date in this campaign, he's close to equalling his 11 from last season.

It seems Scotland coach Mark McGhee, based in the south east of England, has been key in assessing Bridcutt, whose bravery to show for the ball in any circumstance is another attribute Strachan admires.

And with the absence of Scott Brown and Darren Fletcher in Scotland's midfield, it may be that the former Chelsea youth player can seize his chance to shine.

The chances are that you've probably seen a George Boyd goal on television at some point, even if you didn't know it was him at the time.

That's because the attacking midfielder's scored in the region of 90 throughout his career, and many of them have been spectacular enough to gain several telly re-runs.

The 27-year-old, who qualifies through a Glasgow-born grandfather, has even netted for a Scotland outfit before, in the 'B' team's victory over Northern Ireland in 2009.

Like Bridcutt, Boyd plies his trade for a team doing great things in the English Championship as he currently helps third-place Hull City sustain a serious automatic promotion challenge.

He's another player who, over the past few years, has been under the eagle eye of the incumbent Scotland boss.

Strachan likes Boyd's elegance and creativity, and even tried to sign him when in charge at Middlesbrough.

But others also testify to the capabilities of the player who almost joined Nottingham Forest, under Alex McLeish at the time, before the January transfer deadline.

Boyd is on loan at Hull City from Peterborough United, whose manager Darren Ferguson classes him as the best player he's ever worked with.

Furthermore, Steve Bruce has only had Boyd at the KC Stadium for three matches, but has already told Strachan he didn't realise just how good the talisman was.