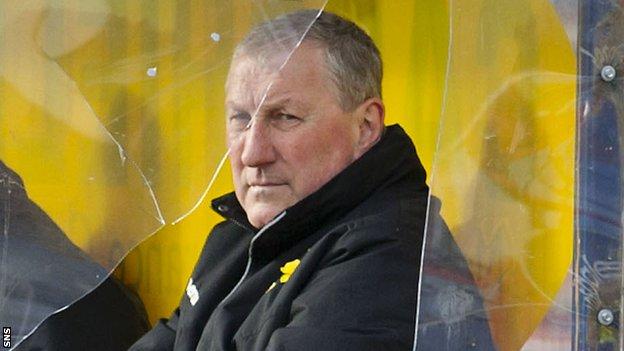 Inverness manager Terry Butcher felt his players were lucky to earn a point against Dundee following a lacklustre showing at Dens Park in the league.

The Highland outfit were a goal down after 13 minutes through John Baird's strike, but levelled with seven minutes remaining through Billy McKay's header.

"I've been asked if it was two points dropped, but I think it's a point gained," said Butcher.

"We weren't at the races, and it's down to Dundee and our sloppy attitude."

Dundee's interim manager John Brown was all set to celebrate his second win in the space of just a few days thanks to Baird's opener, but despite Caley's late equaliser, Butcher insisted his players failed to build any momentum and were lucky to escape with a draw.

"We didn't play at any tempo," said Butcher. "Our speed of passing, movement and touch was very laboured.

"Early on we started brightly, with a spark, looking as though we could get behind. Then Dundee scored - probably against the run of play - but they scored - and it gave them a lot of belief. After that, we huffed and puffed and got one or two things going.

"We spoke to them at half time and said it wasn't good. Fair play to Dundee, they put us under pressure and pushed over the pitch, making it difficult for us to get into our stride.

"If a team does that against you, sometimes you've got to resort to other tactics and pick up the pace. We failed to do that."

Despite the missed opportunity to build on their league position, Butcher insists the dropped points will not dissuade his men from seeking to consolidate their status in the top half of the table and will be aiming to leapfrog Ross County when the sides meet in Inverness next week.

"It's a blow because we wanted the three points, but in the end when you see the game we were happy with a point because we didn't play very well," said Butcher.

"It keeps us in fourth, and we've got a good goal difference which is probably worth a point.

"We've got Ross County above us, so the incentive is to beat them next week at our place and go above them again.

"To be fair to the players, we've not had many like this, but I'm just annoyed that if there's a bit more desire and a lot more hunger, we could have clinched top six."