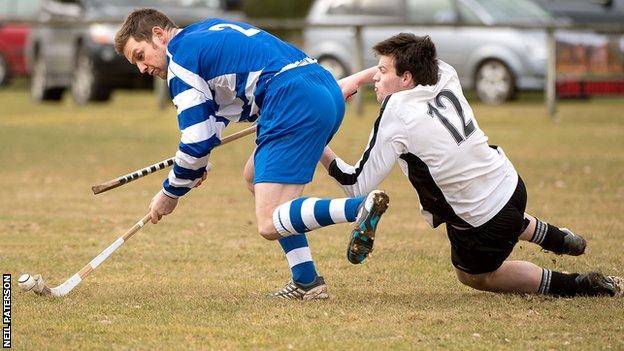 With week two of the 2013 shinty season firmly under our belts, Kingussie sit top of the Orion Group Premiership alongside Kyles Athletic, and Inveraray.

Kingussie disposed of Lochaber at the Dell with two late goals from Thomas Borthwick, while Inveraray took both points over Oban Camanachd with a 4-2 win at Mossfield.

A single strike from 2012 player of the year, Roddy MacDonald, was enough to secure both points for Kyles Athletic, after they travelled north to face Glenurquhart.

Lovat hosted champions Newtonmore at Kiltarlity, and both had to settle for a share of the points after a 2-2 draw. This now puts Newtonmore in fourth place, with Lovat in fifth, after drawing there first two matches.

It was fairly amusing watching the supporters up the side line doing a kind of left-foot-to-right-style dance throughout the game, and looking for any excuse to clap their hands to try and keep warm

Fort William met Kinlochshiel at An Aird for there first home game of the season. Surprisingly it was a lovely dry day in Fort William, however the wind was colder than a polar bears bum.

It was fairly amusing watching the supporters up the side line doing a kind of left-foot-to-right-style dance throughout the game, and looking for any excuse to clap their hands to try and keep warm.

Kinlochshiel started the stronger of the two teams and subsequently found the back of the net first through Findlay MacRae.

Fort William however bounced back instantly with two superbly taken goals from Ryan Campbell to reverse the lead. Outstanding goal keeping from Paul Mackay between the sticks kept Fort in the lead until the 81st minute where MacRae bagged his second of the day for a share of the points.

Both clubs will feel they had chances to win the game, however a draw was a fair result after 90 minutes.

So who do you tip to lift this year's Premiership title? Do you think Newtonmore will make it a fourth successive year, or can Kyles finally manage to create history and be the first South team ever to lift the Premiership trophy?

And what about at the bottom? Which two clubs do you think will drop down to the new National Division?

It is going to be an extremely difficult year for many clubs in the top flight to find points and rhythm with what in my mind is the strongest Premiership ever.

Looking ahead to this weekend's action, Inveraray face Lovat, Kinlochshiel host Glenurquhart, Newtonmore welcome Lochaber, while Oban Camanachd look to get their first points on the board over Kingussie at Mossfield, Oban.

Fort William travel to Tighnabruiach to meet Kyles Athletic. Kyles have got their 2013 league campaign off to a flying start with two wins from two, and after being pipped at the post the last couple of years by Newtonmore to lift the Premiership crown, will be eager to do one better this year.

Fort William will be searching for their first win of the 2013 campaign, however they know their new, inexperienced side will be up against a very strong Kyles outfit, and will have to be on top form to take points from this one.