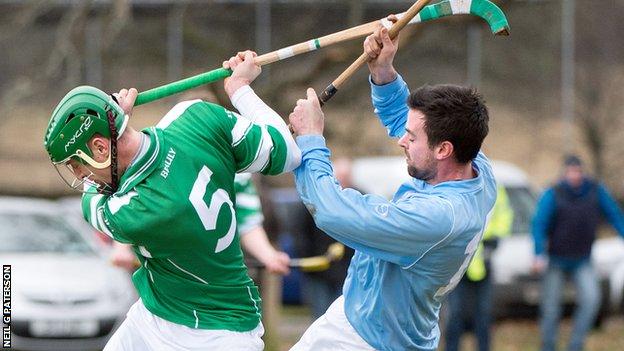 Kyles top the Orion Premiership as the only side with full points from three games following a comfortable 4-0 home win over Fort William.

Inveraray lost their 100% record with a 2-2 draw with Lovat, while Kingussie relinquished theirs after a 3-1 defeat in Oban and four-goal Danny MacRae shot Newtonmore into second place during their 5-1 eclipse of Lochaber.

Roddy MacDonald had Kyles ahead in the first minute and also got their next early in the second half. Thomas Whyte and Dunky Kerr completed the scoring for the Camanachd Cup holders as Fort failed to respond.

At The Eilan Newtonmore matched the 5-1 scoreline they had over Lochaber in last season's MacTavish Cup final to move within a point of Kyles.

MacRae was on fire with a brace in each half and Chris Sellar also contributed. However, Stuart Callison's response for Lochaber did see the score at 2-1 for almost half the game.

It was touch-and-go at The Winterton where Inveraray and Lovat eventually shared four goals.

Chris Crawford opened for Inveraray and Ryan Ferguson equalised. Greg Matheson looked to have it won for Lovat with two minutes left but there was still time for David Robertson to snatch a point for the home side who had Allan MacDonald sent off with 20 minutes left at 1-1.

There was a big win for newly promoted Oban Camanachd at home to Kingussie. Iain Campbell got Camanachd in front early and Thomas Borthwick's equaliser was effective only until the stroke of half time when Iain MacMillan restored Camanachd's lead. Andrew McCuish confirmed the points for Camanachd at 3-1.

Glenurquhart are the only club still looking for their first point despite Neale Reid putting them ahead away to Kinlochshiel just on half time. However, Gordy MacDonald and Keith MacRae turned the tide for the home side in the second period.

Only Kilmallie have full points in Marine Harvest North Division 1 after a 3-1 home win over Skye. In South Division 1, Glasgow Mid Argyll who won 6-0 at Strachur and Glenorchy, 3-1 victors over Taynuilt share the lead on five points out of six.