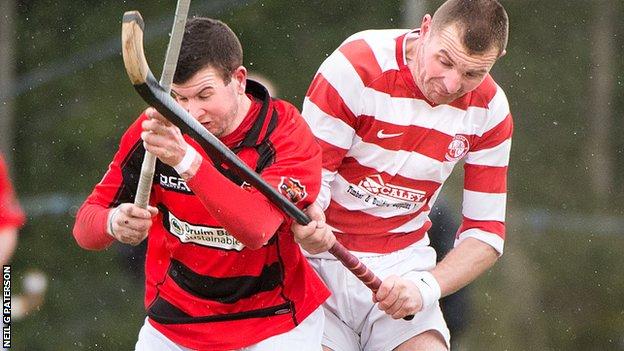 On a day when the term "summer shinty" raised a few ironic smiles, heavy snow in Argyll forced the postponement of the top two games in the Orion Premiership involving the four leading sides.

Champions Newtonmore were unable to reach Tighnabruich to play pace-setters Kyles, while Inveraray could not get out of the county for their fourth versus third clash at Kingussie.

Oban Camanachd did manage to battle their way through thickly white highways and byways to get to Fort William.

And the journey was looking very worthwhile when Iain MacMillian opened early against the Fort's largely young and redeveloping side.

But there is nothing like experience and Gary Innes, who is not short of that, levelled just after half-time before grabbing both points with a last minute penalty for a first win for new co-managers Victor Smith and Adam Robertson.

At Kiltarlity, Lovat scored first through Lewis Tawse midway through the opening 45 but Kinlochshiel's Keith MacRae equalised early in the second half. As a result both teams progressed to four points but still couldn't catch the top four despite their lack of activity.

At Spean Bridge, Glenurquhart got their first point but Lochaber missed out on their first win when their encounter ended goalless. This leaves these two sides still propping up the table.

Pre-season predictions were that this was going to be a tight Premiership and of the 18 games played so far, only seven have been victories by more than one goal and a third of matches have been drawn.

It's very different in Marine Harvest North Division 1 where newly-relegated Kilmallie are romping away with full points from four games with 17 goals for and three against. Six of these without reply came at home to Inverness, including doubles from Grant MacKenzie and Michael Rodgers.

Elsewhere in this league, Beauly beat Strathglass 2-1 while it was 3-1 for Skye against Caberfeidh.