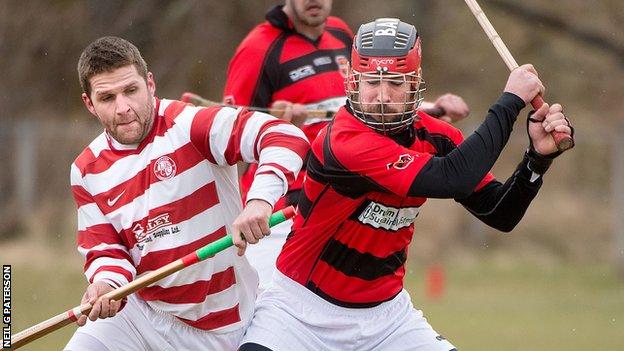 This will be the day that Scotland has its say on independence but it is also traditionally the same date as the Camanachd Cup final!

I'm not sure how this oversight happened but there is still time for Mr Salmond to change it.

It would be a shame to lose so many voters because they were all glued to the television watching shinty's blue ribbon event.

Only three games survived the wintry weather at the weekend, as snow and high winds battered the country.

Lochaber met Glenurquhart at Spean Bridge with both clubs in search of their first Premiership win of the season. However, neither team managed to find a breakthrough in a goalless draw.

Lovat were also looking for a first victory against Kinlochshiel at Kiltarlity but had to settle for a fourth consecutive draw.

Lewis Tawse gave the home side the lead, with Kinlochshiel's Keith MacRae levelling on 58 minutes.

I left Glasgow early on Saturday morning to travel up through the Glen and for about 90 miles was sceptical that our game could possibly be going ahead; counting three vehicles that had gone off, or been blown off the road in the space of five miles past Tyndrum.

With the road thick with white drifting snow, it was unimaginable to think a ball would be hit.

Oban Camanachd had their own problems. Trees had blown down closing the road north overnight.

Undeterred, the Camanachd bus headed for Lochaber and when they arrived at An Aird it was extremely cold and breezy but the field was in perfect order.

The home ranks were boosted by the return of Duncan Rodgers, Brian Simpson, and Euan Campbell.

However, it was the visitors who opened the scoring through Iain MacMillan. A long high ball was played in from the middle, with MacMillan first to react and calmly slipping the ball past the keeper.

Opportunities fell at both ends throughout the remainder of the first half but neither club managed to capitalise.

Fort levelled the game three minutes after the restart when the ball landed kindly for me to have a run at the Oban defence and a bit of lady luck saw the ball squeeze past the goalkeeper.

Against a strong wind, the Fort forwards were forced further back towards the centre line as Oban pushed ahead but this left a bigger space to hit on the counter-attack.

And just when we thought we would have to settle for a draw, the Oban keeper fell over the ball as Fort forward Daniel Stewart stood with his stick in the air.

A penalty was awarded and I stepped up. I've never taken a penalty before knowing it was the last hit of the ball to win a game, while also having the supporters shouting: "Gary, don't you dare ruin our coupons!"

I hit the net much to the relief of the gambling fans, our new management, and of course the team, although I didn't connect with the ball as well as I would have liked.

Finally, I must say I was extremely impressed by the style of Oban Camanachd.

Oban have had a disappointing disciplinary record over the past few years but under new management from Gussy Campbell and co, the sportsmanship on show was a delight to witness.