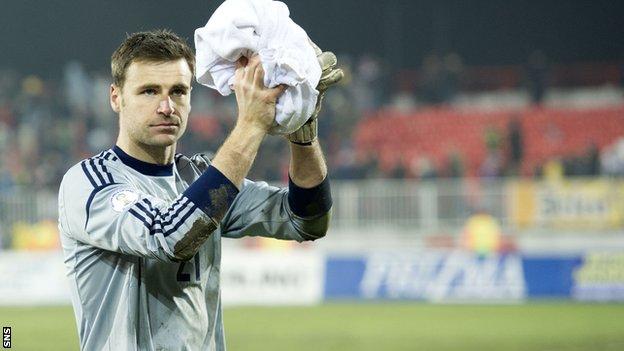 Goalkeeper David Marshall believes Scotland's fortunes will improve once they have a settled side.

The defeat by Serbia - their fourth consecutive loss - leaves Scotland bottom of World Cup qualification Group A with only two points.

"It's a new manager so things are going to take time to gel," said Marshall.

"It doesn't matter if you're getting beaten every game or if you finish third; you are still not qualifying."

Gordon Strachan's side face Croatia twice, with further qualification games against Macedonia and Belgium to come.

Asked whether Scotland contemplated an entire campaign without a victory, Marshall told BBC Scotland: "I don't think it matters, you either want to qualify or you don't qualify.

"It's earlier on in the campaign that we have been disappointed with. I think in the next few games when the gaffer gets a settled side, it will definitely pick up.

"It's swings and roundabouts. We just have to turn draws and defeats into wins, end of story, and shut people up.

"If Mickey Thomas wants to say it's the worst team in history, I think it's just a cheap slur.

"We'll just get on with it and the only thing we can do to shut people up like that is to win games."

Marshall was selected ahead of Allan McGregor and failed to turn around his poor international record, which now reads six caps, six defeats and 17 goals conceded.

The former Celtic goalkeeper was beaten by two goals by Filip Duricic, which came in quick succession after Jordan Rhodes had spurned Scotland's best chance of the game.

Alan Hutton and Gary Caldwell were both culpable as Scotland conceded two soft goals and the side failed to recover.

"It was a disappointing night," said Marshall. "I thought first half we did okay, we defended pretty well the first half hour and limited them.

"Even at the start of the second half we had a few chances. Jordan has had a chance just before they scored. It's a difficult pitch, and it was a difficult chance.

"They have had a bit of luck with the deflections that led to their goals. It's just disappointing that after a good first-half performance we have let in two goals in quick succession."

"When we qualified for France 98 people were talking about us an overage side but we had a spirit that was together," he told BBC Scotland.

"And we knew that if one man made a mistake then the next person would make up for it.

"Today's game is a bit different because there's a lot of individualism involved.

"Scotland need to get that spirit going again and work for each other, because at the minute we don't have that quality."