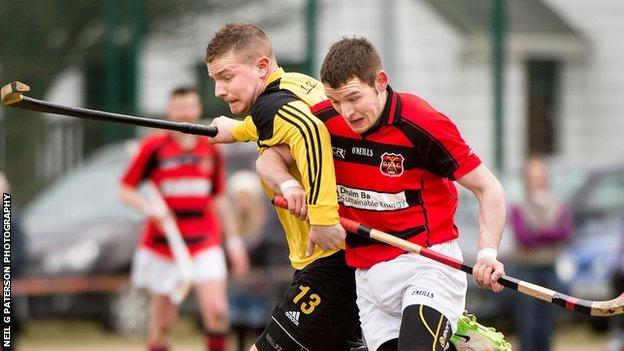 There were some sceptics who wondered how Inveraray would cope with their expected raft of retirals following last season's Camanachd Cup final, but the Argyllshire side now sits two points clear in the Orion Premiership following a 1-0 home win over Lochaber.

Champions Newtonmore jumped into second place with a 2-0 victory in Oban, leapfrogging Kyles Athletic who threw away a lead at Kinlochshiel to lose 3-2.

Meanwhile, Kingussie's reserve team successfully opened their defence of the Aberdein Considine Sutherland Cup but were taken all the way and more by Aberdeen University.

Inveraray's goal came from Peter MacIntyre in the second half and it was also second-half strikes from Chris Sellar and Calum Stewart which saw Newtonmore through away to Oban Camanachd. 'More now sit second with a game in hand.

Kyles slipped down the table despite at one stage leading 2-0 against Shiel, Roberto Zavaroni and Chris Moss scoring within half an hour.

Gordie MacDonald and John MacRae made it all square by half-time before MacRae's winner.

Fort William, with nine players out including three with broken bones, visited Drumnadrochit to play Glenurquhart. However, Glen also had eight players missing, forcing co-managers Fraser MacKenzie and Drew MacNeil to name themselves as substitutes.

Arran MacPhee opened for Fort but Glen went ahead through Neale Reid in the first half and David Smart in the second in advance of Daniel Stewart finally tying it at 2-2.

At the Dell, Lewis Tawse scored the only goal of the game against Kingussie to give Lovat their first league win of the season following four draws.

Kingussie began their defence of the Sutherland Cup, the game's reserve team championship, at home to Aberdeen University and it was only Michael Clark's 118th-minute winner that took them through 2-1.

Lovat followed up their 11-0 win over Inverness at first team level the previous Saturday with another eclipse by the same margin - 12-1 this time - of the same club in this reserve team contest. On the west coast, Lochcarron also ousted Lochbroom 11-0.

The Camanachd Association board meets on Tuesday to decide whether to give a hearing at the AGM on 26 April to Skye's motion, supported by Newtonmore, demanding the scrapping of proposed league reforms.

It is thought that, if the motion is refused, the clubs would requisition a special general meeting to have it heard.