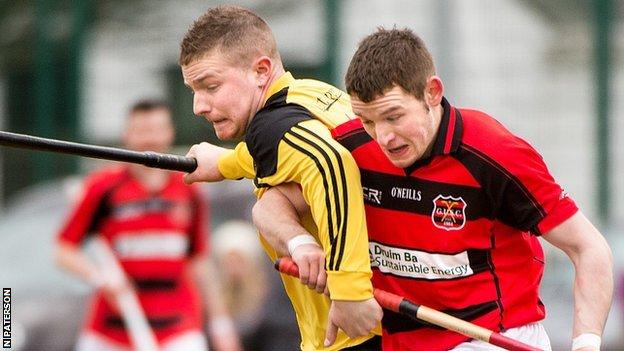 With more and more young folk having to move out of rural areas to find work and study, it seems more and more shinty clubs are trying to adopt a 'no train, no play' policy.

For those of you who don't know what that entails, it just means if you don't get along to train with your club, irrespective of where you live, you don't get to play.

In a sport that you don't get paid for, and devote a hefty amount of your own personal time and effort to travel for, it seems mad that players feel they may have to give up or swap clubs if they wish to continue.

I feel shinty clubs at all levels should be trying to keep their players interested in their respective jersey and sport rather than trying to make them choose the sport over a lifestyle choice.

Do you agree, or do you think players should step aside if they can't show commitment to there individual clubs training? Does your club have a no train, no play policy, and if so do you think it works?

Now, on to the shinty.

Fort William made their way to Drumnadrochit with a virtually unrecognisable squad and came home with a point!

Fort had lost nine of their starting 15-man squad to injury, suspension, work and a stag party.

It was 17-year-old prodigy Arran MacPhee who opened the scoring for Fort after his first senior appearance since breaking his collarbone last October.

Glen then equalised through Neale Reid, and took the lead moments later through David Smart.

However, Fort's Daniel Stewart equalised on 72 minutes to give them a very unexpected point at a venue which is tough at the best of times.

Lovat wrapped up both points at Kingussie with a Lewis Tawse strike after 33 minutes, while Kinlochshiel clawed their way back from two goals behind to beat Kyles Athletic 3-2 at Balmacara.

Inveraray continue to sit top of the Premiership thanks to a Peter Macintyre strike over Lochaber at Spean Bridge, while reigning champions Newtonmore continue their unbeaten league form with a 2-0 away win over Oban Camanachd.

Looking ahead to this weekend's fixtures, and leaders Inveraray face Glenurquhart at the Winterton, while Newtonmore have home advantage over Kinlochshiel.

Fort William clash with their old rivals Kingussie at An Aird.

It doesn't seem that long ago that a winner from this fixture would predominantly go on to lift the league title or win the cup final.

Time, however, has moved on and both clubs have experienced a lot of change over recent years.

With most players who featured in both clubs' glory years now retired, it's now up to the next generation to now continue this battle of old.

One thing for sure is both sets of supporters will be in for a cracker.