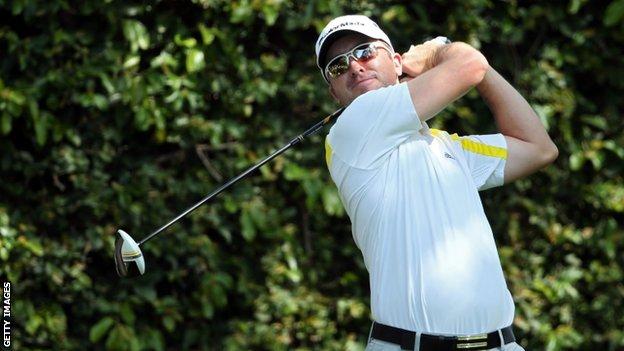 Martin Laird hopes that the 25th anniversary of fellow Scotsman Sandy Lyle's Masters win proves to be a good omen for himself at Augusta this week.

Laird ended a slump in form by

"I flew over and stayed at my manager's house on Sunday and Sandy was there - and they were saying that he also won the week before," said the 30-year-old.

"They were saying, wouldn't it be nice on his 25th anniversary to have another Scot win. I would be happy with that."

at 08:00 local time (13:00 BST), alongside John Peterson, Nathan Smith, with former Open champion Paul Lawrie the only other Scot in the field.

Lawrie, who says he is feeling re-energised after a month off from golf, tees off at 11:40 with Thomas Bjorn and Gonzalo Fernandez-Castano.

Nick Faldo was the last British player to win at Augusta, in 1996, but Laird believes there is a good chance that the losing streak can be broken.

In-form Englishman Justin Rose is among the favourites, along with , who hinted at his own return to form by finishing second to Laird last week in San Antonio.

Laird, who takes to the course at 15:29 with Mark O'Meara and , told BBC Scotland: "There's maybe 30 guys who legitimately can win this tournament and a whole host of them are Brits.

"It's not that we don't have the players to do it.

"These things go in cycles sometimes and Brits were winning it what seemed like every year for a while, with Ian Woosnam and Lyle and Faldo obviously, and I'm sure it won't be long before there's Brits doing it again."

Laird needed last week's win in Texas in order to qualify after a difficult time on the US PGA circuit.

"I've not been playing well for a good number of months now, pretty much since last summer," explained the Glaswegian.

"I've been working hard and not really seeing results.

"I made a swing coach change at the end of last year and most times, when that happens, it takes a good few months for the work on the range and practice to come to the course.

"And it's been a frustrating few months hitting the ball great in practice and playing and getting in tournaments and struggling.

"So it was nice to have it all click finally at Valero and come off with a round that I'll always remember."

That came in the shape of a nine-under-par 63, Laird having started the final day five shots behind overnight leader Billy Horschel.

Laird explained that he had returned to the putter that helped him to his last tournament victory, the Arnold Palmer Invitational two years ago.

"I used that putter at the start of this year," he said. "I was really not putting great with it in the west coast."

So Laird tried several different putters in an effort to improve his scores.

"That's what happens when you are struggling, you start searching for something, hoping that you find gold - and fortunately I didn't," he said.

"Last week I decided to go back to the old faithful and right away it felt comfortable in my hands and I got a little bit of confidence back from that - and, obviously, on Sunday it started working."