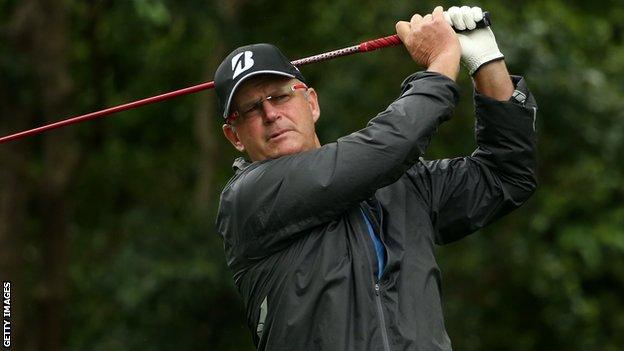 Scottish veterans Sandy Lyle and Paul Lawrie made the cut at The Masters but Martin Laird missed out.

The 55-year-old Lyle, on the 25th anniversary of his Masters triumph, followed up his opening 73 with a 72 to sit at one over par.

Martin Laird's 73, after his 76, saw him bow out at Augusta on five over par.

It was the first time Lyle had made the cut at Augusta since 2009 - thanks to a putter he admits resembles a frying pan.

The 55-year-old Scot made four birdies with a massive black putter known as a 'Black Swan'.

"It hasn't turned into an ugly duckling yet, has it?"' joked Lyle, who also has a distinctive pause in his backswing.

"I used it at the (Senior) PGA last year and I got lots of grief for it.

"But I finished fourth with it, so I was very happy with it. It could be anything. A frying pan, whatever."

Lyle has finished under par after 72 holes just once at Augusta since 1992, the year Fred Couples won the Green Jacket.

However, with 53-year-old Couples setting the clubhouse target at five under par as the second round began to draw to a close, Lyle was asked if he could get into contention for an unlikely second title.

"Oh, I'll cross that bridge when I get near it," he added. "I'm giving myself a chance to obviously play tomorrow, so I'm highly delighted with that.

"That's what I came out to do. And even now I'm right there to get back in there."

Lyle has been paired with Sweden's Fredrik Jacobson in the third round, while Lawrie will play alongside the Dane Thomas Bjorn.