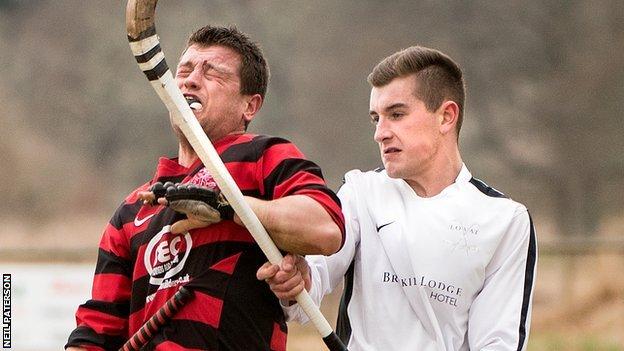 League restructuring for Scottish football, or the lack of it, has made all the headlines in the past week, but shinty also has a fiery debate running on the subject.

The Camanachd Association decided at the start of the 2013 season to reduce the number in next year's Premiership from 10 clubs to eight, while reintroducing National Division 1 shinty.

The sport's governing body feels that, by reducing the number of games throughout the season, it will help with the backlog of fixtures towards the end of the year.

It also believes it will allow for the reintroduction of representative shinty and provide a higher standard and platform for North and South National Division 1 clubs before entering the Premiership.

Skye Camanachd and Newtonmore, however, have made it clear from the outset that they are not in favour of the proposed changes.

Newtonmore club secretary Ian Gibson said on the Skye Camanachd website: ''As far as Newtonmore Camanachd Club is concerned, the gloves are off.

"We are 100% behind Skye Camanachd Club's motion to overturn this misconceived league reconstruction and find ourselves shoulder to shoulder with our old rivals Kingussie and Kyles Athletic.

Something in the sport needs to change, whether or not it's in the form of this reconstruction

"The association has totally misjudged the mood of the clubs.''

Skye Camanachd, now backed by Newtonmore, Kingussie and Kyles Athletic, were the only club to formally lodge an objection towards the change, which will be addressed at a meeting on a date yet to be decided.

I can see pros and cons for both sides of the argument.

Perhaps the way it was handled by the Camanachd Association could have been better - letting the shinty community know and understand their thinking behind the changes earlier may have prevented some of the backlash.

However, in my opinion, something in the sport needs to change, whether or not it's in the form of this reconstruction.

I think action needs to be taken by the Camanachd Association to help Division 1 clubs North and South, and the lower leagues within the sport, to progress and survive.

So how do you feel about the proposed league reorganisation changes?

In terms of the weekend's results, Inveraray continue to sit top of the Orion Group Premiership with a 2-0 win over Glenurquhart at the Winterton.

Elsewhere in the Premiership, Lovat convincingly beat Oban Camanachd 4-0, while Newtonmore's Glen Macintosh bagged four goals for the champions in an 8-1 thrashing of Kinlochshiel.

Kyles Athletic got back to their winning ways with a 2-0 win over Lochaber, while Kingussie beat Fort William 3-0 at An Aird.

In the North this weekend, it's quarter-final time in the Co-operative MacTavish Cup, with Kilmallie v Beauly, Lochaber v Lovat, Glenurquhart v Kinlochshiel, and a Badenoch derby with Newtonmore meeting Kingussie.