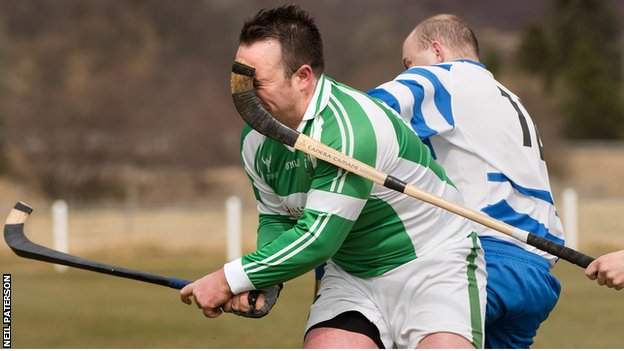 Last weekend a Kilmallie player was unfortunately hit on the side of the head with the caman during play, an injury which required stitches and hospital treatment.

The following day he attended the hospital once more as he wasn't feeling quite right.

He was subsequently taken by air ambulance to Glasgow's Southern General where he has since undergone three operations to his skull.

The severity of this injury is uncommon within the sport, but this should be a reality check for all young players out there, who, after turning 17, are taking their helmets off at the first available opportunity.

Shinty is changing and more and more senior players are wearing helmets for their own protection, not to mention the cost of dental work and other issues associated with injuries.

If Ronald Ross can bang in 1000-plus goals with a helmet on, then there is no excuse for the rest of us.

I'd also like to take this opportunity to wish the young lad my best wishes at this time for a healthy and speedy recovery.

Now on to the shinty.

It was predominantly cup action for the top teams this weekend between the North's MacTavish Cup, and the South's Celtic Society competitions.

In the MacTavish Cup quarter-finals, Kilmallie beat Beauly 3-0 at the Canal, while Glenurquhart progressed to the semi-finals with a 3-2 win over Kinlochshiel.

In the Badenoch derby, Newtonmore's Calum Stewart bagged a double over rivals Kingussie to underline that the dominant force in Badenoch is still very much blue and white.

Because Fort William did not have a fixture scheduled I caught the Lochaber v Lovat quarter-final at Spean Bridge.

If I'm honest, I was expecting Lovat to walk this fixture as I knew Lochaber were short and have not managed a win since stepping up to the Premiership.

Shaun Nicholson gave Lochaber the perfect start with a well-taken strike after 15 minutes to the delight of the home support.

Matheson, however, found his touch late on in the first half to give Lovat the lead as they turned in for the break.

In the second half, it wasn't long before Ben Delaney had the ball in the back of the net for Lochaber's third to level the tie.

As the game raced end to end, I can honestly say I have not seen such a close game in a long time.

However, Lovat keeper Stuart MacDonald grabbed the spotlight throughout the match, picking off at least three saves with cat-like instincts that not I'm sure even the Brahan Seer could have predicted.

The match finished 3-3 and throughout extra time, it was once more MacDonald to the rescue of Lovat at the crucial moments.

Neither team managed to find a winner, and the dreaded five penalty takers were decided.

Both MacDonalds between the posts for Lochaber and Lovat produced some excellent saves.

However, as Lachlan Campbell struck the best penalty of the day, Stuart MacDonald broke the Lochaber supporter's hearts with a fantastic save to progress Lovat through 3-2 on penalties.

In the South's Celtic Society Cup, Oban Camanachd, Glasgow Mid Argyll, Kyles Athletic, and Inveraray all progressed through with an accumulation of 28 winning goals.

It was a historic day at St Andrews on Saturday as a full 12-a-side representative match between the USA and England took place.

This is believed to be the first time a full 90 minute 12-a-side representative match that does not involve Scotland playing has taken place. England were the victors with an Allan MacDonald double to kick-start what we hope to be a long and prosperous fixture.

Looking ahead to this weekend's Premiership action, Inveraray clash with Newtonmore, Kingussie challenge Kyles Athletic, Oban Camanachd have home advantage over Glenurquhart, while Fort William face Lovat at An Aird.

I am still trying to get a rib or transport off Harris on Saturday morning to make our fixture against Lovat, so if there are any ferry captains that support the yellow and black or fancy swinging by and nabbing me from Tarbert on Saturday morning, let me know.