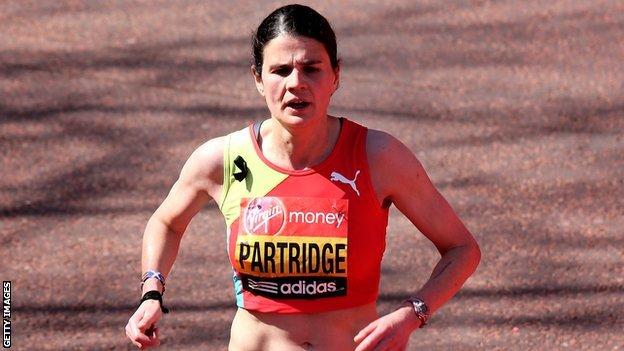 The body running Scottish athletics hopes Glasgow's staging of the 2014 Commonwealth Games is already having a positive effect on the athletes.

Haining, now 41, ran two hours, 36 minutes and 52 seconds in London and could yet become Scotland's oldest ever female athlete at a Commonwealth Games.

Hawkins was the top British runner in the elite men's race. He ran 2:16:50 in only his second marathon.

Partridge, from Oban, came ninth in a time of 2:30:46, which is a good enough time for a place at the World Championships in Moscow in August.

"I am thrilled with ninth place. The best I have managed before at this kind of level is 17th so to be in the top 10 in the London Marathon feels special," she told scottishathletics.

'I was always very hopeful about the Glasgow 2014 standard, which is at 2:40:00, and hopefully I am pretty secure for that now."

At the Mount Sac Relays in Walnut, California, McLachlan produced the second best long jump in Scottish athletics history and Dry gave the third-best hammer throw of his career.

McLachlan's 7.86m pushed him into second place in the Scottish all-time list for the long jump behind record-holder Darren Ritchie and was well clear of the 7.60m that is the Glasgow 2014 standard.

Dry, meanwhile, finished third in the elite hammer competition in California, with his best throw of 74.46m a long way beyond the 65m asked for the Glasgow games.

And Sharp ran inside the required time in her first 800m run of the season. At Walnut her time of 2:02:63 landed her sixth place and was inside the Commonwealth Games standard of 2:02:80.

She tweeted: 'Happy with my opener and great to be back in competition again.'

Finally, in Florida, Nimmo leapt 6.31m to get inside the long jump standard of 6.20m.

"Maybe what happened in the countdown to London will happen in the run-up to Glasgow - and the home Games factor has an effect,' said Partridge.

"You are going to get people coming out of the woodwork, in a manner of speaking, and trying to come up with a performance which wins them a Scottish vest for a Commonwealth Games in Scotland.

"We cannot possibly say Hayley Haining has 'come out of the woodwork' because she has been around for a number of years and has been such a good athlete. She was always liable to have a go at the Glasgow 2014 standard.

"But I certainly do think the thought of the Games coming up will make people work harder in training and compete better.

"I'm certainly hoping now that being nine minutes inside the women's marathon standard will mean I am in a good position but there's a long way to go until the selection periods close.

"There is plenty of time for other people to run marathons."