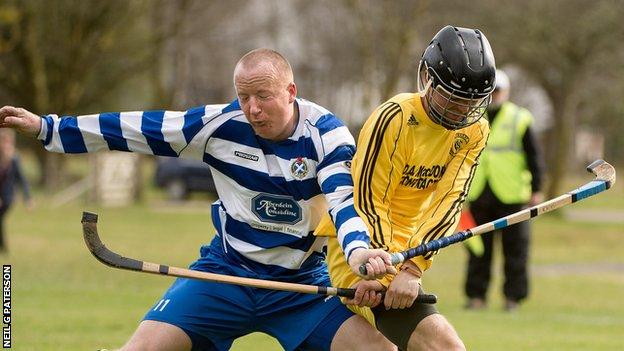 The stay-away move was led by Skye and also included leading clubs Newtonmore, Kingussie and Kyles in protest at the handling of the ongoing league reconstruction row.

A Camanachd Association statement said the 33 voting members present among an attendance of more than 60 was the biggest in recent years.

Attending for the first time were representatives of new members the United States Camanachd Association, Michael Bentley and Elheran Francis from North Carolina.

The meeting approved a change in the agm date to November and a second consecutive presidential term before an informal discussion on league reconstruction that had earlier been criticised by those involved in the boycott.

The Badenoch clubs, Newtonmore and Kingussie, may have been posted missing from the annual meeting but were certainly very much present on the field the next day in the Orion Premiership.

A 4-1 victory at Inveraray allowed More, with a game in hand, to oust their hosts from the top of the table on goal difference.

Meanwhile, Kingussie made further progress when they came from two goals down to beat Kyles 3-2 at The Dell.

Lovat cashed in on Kyles' defeat to go third with a 6-0 victory over Fort William, while Oban Camanachd failed to get off the bottom when they lost 2-0 at home to Glenurquhart.

Michael Russell scored in the first half for Newtonmore at the Winterton and Calum Binnie then Danny MacRae in the first three minutes of the second put the game to bed.

Chris Sellar got a late fourth and there was an even later consolation for Inveraray in the form of a Norman Campbell own goal.

At Kingussie, Kyles went 2-0 up in the first quarter hour with a Roberto Zavaroni double.

Fraser Munro got a morale-preserving goal back for the home side just before half time and then a Rory Borthwick double in three minutes shortly after the restart won it for Kingussie.

Lovat were in rampant form against Fort William at an Aird. Greg Matheson got the first four, including a hat trick in 19 minutes before Kevin Bartlett and Lorne MacKay compounded Fort's agony.

Newly promoted Oban Camanachd could not cash in on Lochaber's day off and consign them to the bottom since they lost 2-0 at home to Glenurquhart, who had Neale Reid on target in the first half and David Smart in the second.

Kilmallie continue to edge Beauly on goal difference in Marine Harvest North Division 1 after high-scoring victories for both.

Glasgow Mid Argyll stay top of South 1 with a 3-0 win over Glenorchy.