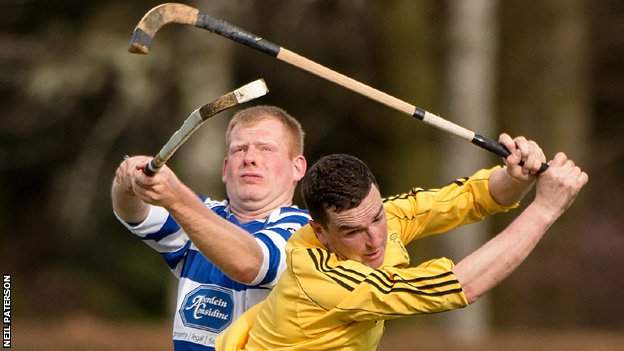 Fort William were knocked for six on Saturday at the hands of Lovat in the Orion Group Premiership, pushing them further down the table, while the Kiltarlity men now sit a point adrift at the top behind Inveraray and Newtonmore.

It was a lovely dry day at An Aird and what seemed a larger than usual home support had turned out around the Fort William ground to watch the boys do the business.

Business, however, was not done; in fact, I'd go as far to say if we were a business on Saturday, we would be in liquidation, and begging on the street!

For the first 20 minutes or so Fort dominated the centre line and time and time again threatened in front of the Lovat goal without really testing Macdonald between the Lovat sticks.

Then against the run of play, Greg Matheson scored on the 30-minute mark to take the Kiltarlity boys into the break a goal ahead.

The chat was positive at half-time in the Fort dressing room but with the slight wind now in Lovat's favour they raised their performance and enjoyed most of the possession.

The wind was knocked out of the Fort sails four minutes from the restart when Matheson bagged his second of the afternoon.

Right across the team the belief in winning the fixture had just vanished. With Lovat now firing on all cylinders the goal gates opened and punishment ensued.

Matheson netted twice more, with contributions from Bartlett and MacKay, the 6-0 loss the heaviest home defeat for Fort that I can remember in my senior shinty career.

(If I'm wrong and Fort have been beaten by more at home when I have been playing then please keep that result to yourself!)

The young Lovat side deserve praise for their fantastic movement and running off the ball. If they can manage to keep that squad together over the next couple of seasons, I have no doubt they will soon win silverware.

One half of Badenoch's eyes were on champions Newtonmore's trip to Inveraray in the battle of the top two. Newtonmore comfortably bagged both points with a 4-1 win to sit top of the Premiership.

Newtonmore and Inveraray have the same number of points but 'More have a game in hand.

The other half of Badenoch watched Kingussie take on Kyles Athletic at the Dell. Kyles, who mounted a strong start to their 2013 league campaign, were favourites going into this match and showed why with two goals in 15 minutes from Roberto Zavaroni.

However, as I have learned, you can never write off Kingussie! Fraser Munro pulled one back for Kings followed by a second-half double from Rory Borthwick to seal victory and both points with a 3-2 win.

Glenurquhart secured their second successive win in a row with a 2-0 away victory over Oban Camanachd. Neale Reid and David Smart gave the Drum men some breathing space from the bottom teams, lifting them to sixth place.

Fort William travel away to Newtonmore where they desperately need points if they are to avoid an early relegation battle.

Fort held Newtonmore to a 3-3 draw last month before extra-time in the MacTavish Cup, and will be hoping to do one better this time.

Yet Newtonmore have strengthened their squad with the return of the formidable Cameron Binnie and, alongside Lovat, are unbeaten this season.

This weekend also kick-starts the preliminary round of shinty's blue riband event, the Camanachd Cup, widely regarded as the sport's most sought-after prize. The competition attracts the largest crowds and the most media attention.

This year's final will take place at Fort William's home ground, An Aird, on Saturday 14 September.

Finally, there was some good news for shinty on Friday night as the Camanachd Association held its AGM.

However, the Camanachd Association was delighted to announce a record level of investment in 2012 and an increase in turnover to £579,774.

It also announced an increase in sponsorship and participation in youth development leagues and cup competitions.

There's more on the AGM, news, fixtures, and results at the Camanachd Assocaition's website.