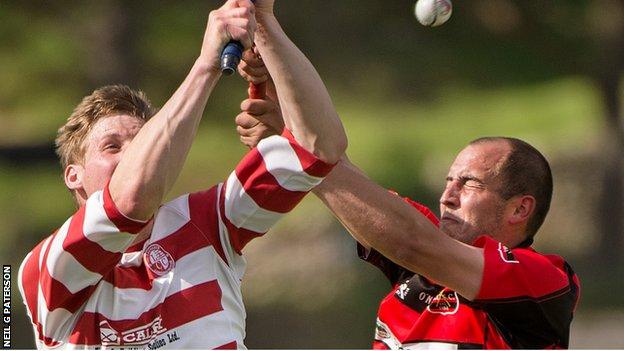 With most players showing off their dance moves at the Rock Ness music festival, there were a few gaps in the shinty calendar.

Fort William took advantage of a fixtureless Saturday to celebrate the 21st anniversary of the club's first Camanachd Cup victory.

Several old-timers were on show at An Aird as Kingussie and Fort William gathered as many original squad members as possible to commemorate the occasion.

It was a stunner of a night and hundreds of spectators gathered to watch the legends strut their stuff.

Ronnie 'Mince' Macleod had travelled back from London and was turning heads before the match had started by supported an extra large package down his shorts.

There were all sorts of rumours that Viagra had been taken the night before, and he was using his W.M.D to terrify the Kingussie players.

But as Ronnie came over to say hello and take a swig of beer as part of his warm-up, he explained the strange goings on in the trouser department.

Laughing, he explained he had forgotten his jockstrap and had substituted it with an oxygen mask!

He also felt that it might have been useful to have such equipment on hand in case the big butcher needed resuscitated. Thankfully it was not needed.

The game itself was a stunning display of talent from both sides and many youngsters could learn a thing or two from watching such a game.

Two sublime goals from Victor Smith and one from Davie Anderson finished the reunion with a 2-1 win to the Fort.

The sniper in the stand started to rear his head towards the end of the 30 minutes each-way game with a few hamstrings going. However, there were no serious injuries.

To see the likes of Anderson, Willie 'Can' Macdonald, Ali Clark, Drew MacNeil, Kevin Thain, Jimmy Gow, ah the list goes on, back in a strip was just fantastic.

I'd also go as far as to say, both teams would still give many of today's Premiership clubs a run for their money, Well, for the first 20 minutes anyway...

There was only one match on in the top flight, with champions Newtonmore beating Inveraray 3-1 thanks to a Danny Macrae double to go top of the pile, with a game in hand on Lovat who are a point behind.

Meanwhile, Glenurquhart and Caberfeidh booked their places in the last eight of the Camanachd Cup.

Following a 3-3 draw in the first tie, Glenurquhart saw off Lochaber 3-1 on home soil to set up a meeting with Fort William.

Not too far up the road, Caberfeidh beat South Division 1 Glenorchy by the same margin, with Newtonmore waiting for them at the Eilean.

In the Artemis Macaulay Cup, Lovat bounced back with a 3-1 away win over Kinlochshiel, while in the 1st Division's Balliemore Cup, Bute and Beauly progress with wins over Strachur and Glasgow Mid Argyll.

Next weekend sees the first final of the season in the north and local rivals Glenurquhart face Lovat in the Co-operative MacTavish Cup at the Bught Parks, Inverness.

On current form, Lovat will go in as favourites to lift the trophy for the first time since 1953.

Glen have never had their hands on this silverware but they did win the Macaulay Cup last year and so have some experience about dealing with the preparation for final day and the added thrill/worry of live TV.

Mental preparation is far more important at this stage in the competition than worrying about any extra training. This is where Glenurquhart might have the edge on a young Lovat side and will probably look to exploit that in the opening 10 minutes or so before the nerves settle.

One thing for sure is we're in for a cracker and lovely to see two fresh-faced names contesting this final.

You can watch all the action live on BBC ALBA from 16:05 BST.