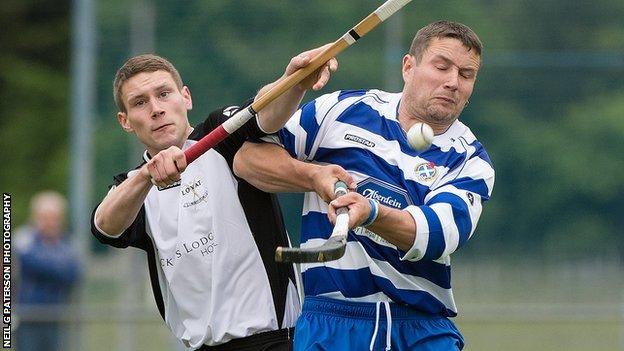 Kyles Athletic retained their recent edge in cup competition over south rivals and holders Inveraray with a 3-2 penalty shootout victory in the Celtic Society Cup final for the south area championship, after a goalless draw at Strachur.

Premiership champions Newtonmore went a potentially decisive four points clear of Lovat, with a game in hand, thanks to a 1-0 victory over their nearest title rivals in their top of the table clash at the Eilan.

And Lochaber completed back-to-back Premiership victories over major names in the game when they beat Kingussie 3-2 at Spean Bridge.

It remained stubbornly goalless for 90 and then 120 minutes at Strachur between the two star acts of south shinty, before the final ended the same way as the MacTavish Cup two weeks previously and went to the wire with a shootout.

At the Eilan, Newtonmore had the bulk of the play and went ahead after 37 minutes through Fraser MacKintosh. This was just after Lovat's Greg Matheson had had an opener ruled out for offside.

Lochaber have been flying under new manager Robert Johnstone. The previous Saturday a debut victory over Camanachd Cup holders Kyles took them out of the Premiership relegation zone and they followed that up with a 3-2 home win over Kingussie.

Ben Delaney twice put Lochaber ahead, but on both occasions Thomas Borthwick very quickly equalised to make it 2-2 after just 19 minutes. Then there was a goal drought for almost an hour before substitute Hugh Innes's winner with 15 minutes left.

Hugh's brother Gary plays for local rivals Fort William, who remain in the bottom two and are now three points adrift of Lochaber, who also put them there with their earlier win against Kyles.

While their neighbours were triumphing over Kingussie, Fort went down, also 3-2, away to Kinlochshiel. Keith MacRae put Shiel ahead before Gary Innes levelled. A John MacRae double then had Shiel 3-1 up in advance of a response from Fort's Josh McGee.

Beauly defeated Kilmallie 4-1 at Drumnadrochit to win through to the Balliemore Cup final on 13 July where they will meet Bute.

Connor Ross, a Barry MacDonald penalty, Josh MacDonald and Marc MacLachlan all scored for Beauly before Martin Munro's late reply for 11-man Kilmallie, who had Iain Robertson sent off.

There was deadlock at Strathpeffer between the two North Division One sides, who appear to be contesting the third and final place in next season's restored National Division One when Caberfeidh and Syke drew 2-2.

With Beauly and Kilmallie strong favourites for the top two places, Skye remain third, five points clear of Cabers who have two games in hand.