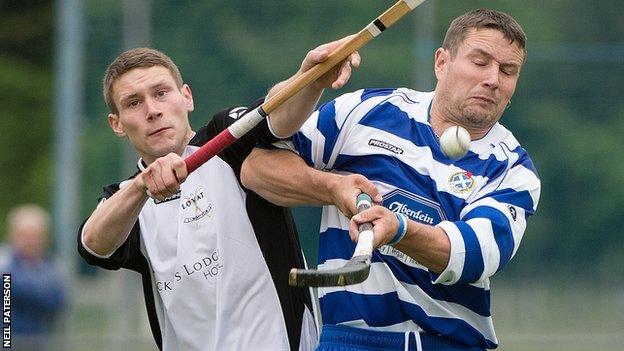 Kyles Athletics lifted the first silverware in the South after beating Inveraray to lift the Celtic Society trophy at Strachur.

A goalless draw after 120 minutes left both teams facing a dreaded penalty shootout which the Tighnabruaich men snatched 3-2. By all accounts the bus carrying the Kyles winning team still hasn't made it home.

In the Premiership, Lochaber continued their winning ways under new manager Robert Johnston, this time with a win over Kingussie.

Doubles from Ben Delaney and Thomas Borthwich had the game at two apiece, until Hughie Innes, my little brother, smashed home what he is calling goal of the season to claim both points, putting his older brother further into the relegation zone.

I've had words, but he has promised to do it again!

It was a top of the table clash live on BBC ALBA when reigning champions Newtonmore clashed with Lovat at the Eilean.

Fraser Macintosh was the difference between the two as his first-half strike secured both points for 'More with a fourth consecutive league title for the Badenoch club looming.

After Fort's disastrous performance last weekend, spirits were high as we travelled away to Kinlochshiel.

With a couple of last minute call-offs, managers Victor Smith and Adi Robertson got the opportunity to start two fresh faces from the second team, while in search of two points.

Kinlochshiel started as Newtonmore had done the previous week and completely ripped apart the Fort defence for the opening ten minutes, while missing a first-minute penalty.

Inevitably, they scored through Keith Macrae; however, moments later, I managed to level the score after a long ball through from Gordy Mackinnon.

Mackinnon then clattered the post seconds later before a counter attack had the ball in the net once more for Shiel, this time from John Macrae.

Fort William were creating more and more chances as the game progressed, but great goalkeeping at both ends of the field kept each team in the match.

The next goal was vital and it was 'Shiel marksman John Macrae who once more found the net to give them a two-goal cushion.

Josh Mcghee did find the net to bring the deficit back to one, but Fort could not find an equaliser and both points stayed at Kirkton.

This was by far a better all-round performance from the Fort young and not so youngsters, but, with Lochaber taking both points off Kings, this now puts the yellow and black further in the brown.

Looking ahead to this weekends fixtures, it's Camanachd Cup quarter-final day, with Newtonmore having home advantage over Caberfeidh, Kyles Athletic facing Beauly, and Kingussie challenging Kinlochshiel.

Fort William head for Drumnadrochit to meet Glenurquhart in their quarter-final draw.

Glenurquhart are extremely hard to break down on their home field, and, having lost out in one cup final already this season, will be eager to try and make another.

Fort on the other hand are without ex-Scotland Internationals, Duncan Rodgers and Chris Bamber, due to holidays, and Brian Simpson due to a serious knee injury.

With the best will in the world, Fort's backs will be against the wall and will go into this match as underdogs.

That said, Fort William have the best record in the Camanachd Cup over the past decade, however it would be fairly unthinkable at this stage to imagine getting our hands on the silver beast this season. Would it??

Who do you think will make it through to this years semi-finals, and lift shinty's most prized possesion?

In the Premiership, Inveraray face Oban Camanachd at the Winterton, while Lovat host in-form Lochaber. This will be a big test for Lochaber and a win away at Kiltarlity would be a huge leap in securing the Spean Bridge side's survival.