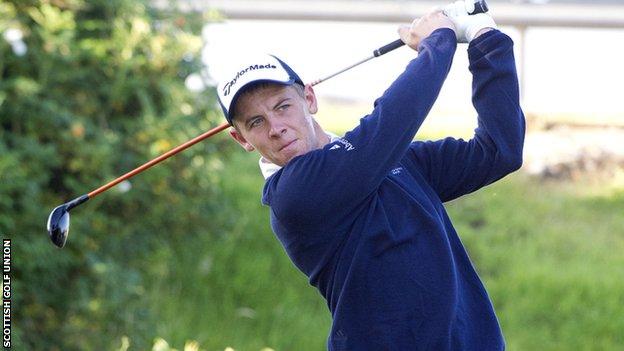 Scottish amateur champion Grant Forrest booked a maiden appearance at the Open at the first time of asking.

The 20-year-old, from Craigielaw less than four miles from this year's venue Muifield, topped the local qualifying contest at Dunbar on Tuesday.

"I don't think it's really sunk in yet that I'm going to playing in the Open, a major," Forrest told BBC Scotland.

"It's what you always dream of and I can't wait. It'll be a new experience and a learning curve for me."

Forrest, who is studying at San Diego University, shot rounds of 67 and 65 at Dunbar to make qualifying look easy on a day of high winds and rain.

"It's great," he added. "Coming into the final qualifying, it's a bit of a long shot - there's only three spots out of 72.

"You know you usually have to shoot pretty low numbers and I guess it was my day."

And now Forrest is looking forward to the biggest test of his fledgling career at Muirfield from 18-21 July.

"There'll be a good bit of nerves going on," he admitted.

"But it's just another game of golf, that's how I felt in qualifying and I think it really helped. You just have to take one shot at a time and that's what I'll be trying to do when I'm there.

"I've played in front of a couple of wee crowds before but nothing like the crowds that are going to be at Muirfield."

On the prospect of playing partners at the Open, he added: "Anyone's going to be exciting. Obviously, it would be great to be paired with someone high up in the world; someone fun, good to talk to that'll keep me relaxed."

Forrest did enjoy a spot of good fortune at Dunbar, where he finished ahead of India's Shiv Kapur and John Wade of Australia.

"I did have a huge piece of luck at the 17th where I chunked a chip," he explained.

"It hit the concrete path over the burn but bounced into a bunker and I got up-and down from there.

"I would have to admit that I was getting nervous by that point but I managed to birdie the last which was a bit of a relief."

Meanwhile, Lloyd Saltman is looking forward to enjoying some home comforts after qualifying for his third Open Championship.

The 27-year-old was the winner of the silver medal for the leading amateur in 2005 at St Andrews and played at Turnberry in 2009.

"I'm just delighted big time to be back into the Open and especially Muirfield as I have been driving past every day and watching the stands going up," he said.

"All my Open appearances will have been in Scotland and I am very pleased with that.

"To be playing at Muirfield and just living 10 minutes down the road is amazing.

"I've only played there twice before and that's been in the winter when it's been freezing and with the ground solid."

George Murray was the other Scot to come through qualifying but there was no place for Colin Montgomerie, who finished well off the place at Gullane.