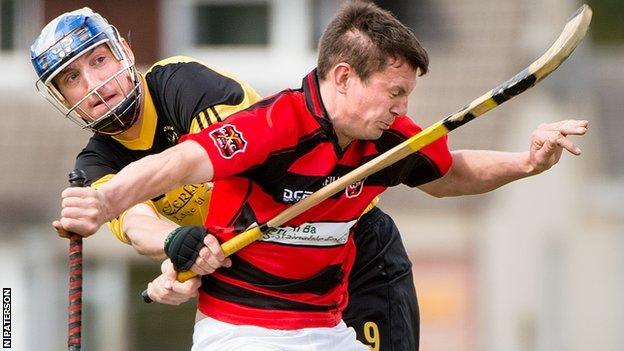 It was quarter-final day in shinty's most prized possession, the Camanachd Cup.

Last year's winners Kyles Athletic breezed through to the last four thanks to a 7-2 win over North Division 1 outfit Beauly, while a Ronald Ross hat-trick helped Kingussie dump Kinlochshiel out of the competition after a 5-2 home win.

It took Newtonmore 55 minutes to find the opener against North 1 side Caberfeidh at the Eilean in what many expected to be an easy win.

However, this was not to be, with only Glen MacIntosh and Danny Macrae strikes putting the second Badenoch team through to the last four courtesy of a 2-0 win.

Fort William travelled to Drumnadrochit to face Glenurquhart in their quarter-final.

It was a beautiful day and both Fort and Glen second teams were playing when we arrived; and we were surprised to notice that Glen had players playing in the reserve match before starting in the quarter final.

This was good news for Fort William who had fast but inexperienced players on the field.

Glenurquhart had most of the pressure in the first half and tested Fort's keeper on a few occasions, but couldn't capitalise on their chances.

As the game raced on Fort got more a grip of the midfield and started to make Glen's Stuart Macintosh work between the posts.

With less than tem minutes remaining, it looked like a single goal would win it, and, when Fort's Daniel Stewart's shot was saved on the 82nd minute, I was first to react on the second ball and slipped it past 'Smack' to give Fort the advantage.

Barely a minute had passed from the resulting throw up befored Ryan Campbell doubled the lead and confirmed Fort's name in the semi-final draw come this Wednesday.

This was a huge win for Fort and only the second time this season have beaten a top-flight team. Fingers crossed it's the start of better things to come.

In the Premiership, Scott Paterson's 90th minute strike for Lochaber meant a share of the points from a six-goal thriller at Kiltarlity, while Oban Camanachd leapfrogged Fort William at the bottom of the table after a 2-1 win away at Inveraray.

I'm off to the National Shinty Camp this week to help development officers, Ronald Ross, Euan McMurdo and crew shout and scream at shinty's new kids on the block.

I did it last year and loved it, and I'm so excited to be heading back to take some abuse and help pass on some skills and dance moves in what looks like a scorcher of a week ahead.

We will be joined by Scotland rugby legend Chris Paterson on Wednesday, who will draw the Camanachd Cup semi-finals to be played on 3 and 10 August.

I think if I could pick at this stage I'd say Kingussie would be my team of choice for the next round, leaving Kyles and Newtonmore to battle it out in the other semi.

One thing is for sure; the other three will want Fort!

Looking ahead to this weekends Premiership fixtures, Glenurquhart take on Newtonmore, while Kinlochshiel host Lochaber.

Fort William have home advantage over Inveraray in a must-win game for the club.

Here's hoping this semi-final spot will give training numbers a boost and the lads a huge lift.

We all took a lot from Saturday's win, but even winning the Camanachd Cup would be no consolation if we were in Division 1 next season.