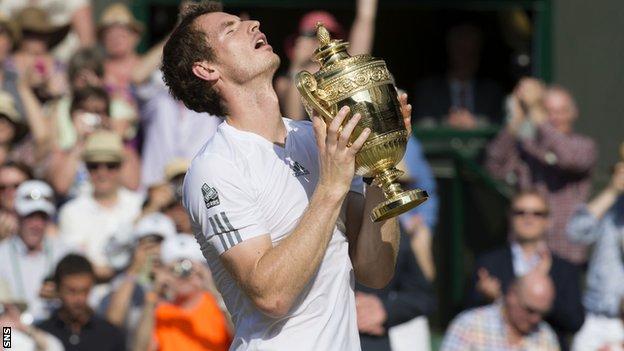 The question of whether Andy Murray's Wimbledon triumph ranks as Scotland's greatest ever sporting achievement is undoubtedly being asked in living rooms, offices, pubs and streets throughout the country.

Not only the fantastic result, but the convincing manner of his win astounded audiences everywhere as he became the first Scottish men's singles title victor at the All England Club since Harold Mahony in 1896.

But before we jump into a 'yay' or a 'nay' in response to the question posed earlier, let's look at a selection of some of the other great Scottish sporting achievements which could potentially rival Murray's victory.

With six gold medals, Sir Chris Hoy is the most successful British Olympian of all time.

The Edinburgh-born track cyclist, who announced his retirement in April, spread his gold medal haul over three consecutive Olympic Games.

His single gold in Athens in 2004, his triple gold capture in Beijing in 2008 and, perhaps most likely, Hoy bagging double gold during his home Olympics in London in 2012 could all be considered as Scotland's greatest ever sporting achievement.

While he won't feature at the Glasgow 2014 Commonwealth Games, several of the 17 events will take place at the velodrome named after the 37-year-old.

Jamaica's Usain Bolt may deservedly be the talk of men's sprinting in the present time, but youngsters of today should note the Olympic 100m crown rested on the head of a Scot in 1980.

Alan Wells's 10.25 seconds run at the Moscow Olympic Games is definitely up there as one of the greatest Scottish sporting achievements of all time.

Now aged 61, but 28 at the time, Wells overcame pre-race favourite Silvio Leonard of Cuba in a tight photo-finish.

Wells was judged to cross the line just three inches in front of Leonard.

Much was made about the credibility of Wells's victory, given that the American Olympic team had boycotted the Moscow Games.

However, the Edinburgh man accepted an invitation to race the best USA had to offer at a track meeting in Germany less than two weeks after his Olympic win.

And he duly defeated the likes of Stanley Floyd, Mel Lattany, Carl Lewis and Harvey Glance with a 10.19s to win another final.

Staying on the subject of sprinters, the man nicknamed the 'Flying Scotsman' ran to Olympic gold at the Paris Games of 1924 - but just not in the event he was initially expected to.

Liddell, a committed Christian, stayed true to his convictions by not running in the Sunday heats for the 100m and therefore had to withdraw from that competition.

Instead, he focused his energies on the 400m and with his famous 'head looking skyward' running style, charged home to gold in a record-breaking 47.6s.

Taking the prestigious medal in an event relatively alien to him surely makes that achievement one of Scotland's greatest.

Also a Scotland rugby international player, Liddell eventually switched his attentions to missionary work, where he met a premature death as a 43-year-old in 1945.

Football can throw its hat into the ring in this debate, too, with the European success of a variety of clubs arguably battling it out for the honour of Scotland's greatest sporting achievement.

Celtic's Lisbon Lions defeated Inter Milan 2-1 to win the European Cup at the Estadio Nacional in Portugal in 1967.

One of the amazing factors in that feat was the fact that 14 out of the 15-man Celtic squad to take part in the triumph were born within 10 miles of Celtic Park.

In the European Cup Winners' Cup final of 1972, Rangers beat Dynamo Moscow 3-2 at the Nou Camp to allow captain John Greig to lift the coveted trophy for the Ibrox men.

Most recently, it was Sir Alex Ferguson's Aberdeen side that savoured victory in a European final.

And, like Rangers, it was the European Cup Winners' Cup they brought back to Pittodrie after seeing off the mighty Real Madrid in Gothenburg in 1983.

John Hewitt's goal in extra-time meant the Dons became only the third Scottish side to win a European trophy.

So, there are some of Scotland's incredible sporting achievements.

Let's finish where we started: is Murray's the greatest?