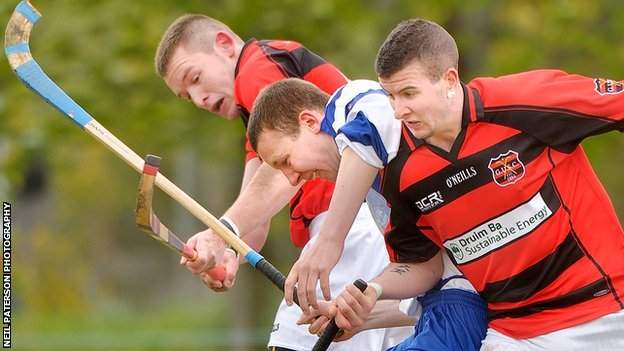 Newtonmore stepped up their bid to land all three of shinty's national senior trophies with a 4-2 victory away to Glenurquhart in the Premiership.

The victory puts them five points clear of Lovat with one game in hand.

Newtonmore also have semi-finals in the MacAulay and Camanachd Cups on 20 July and 10 August respectively.

Fort William moved off the bottom of the table courtesy of a two-all draw against Inveraray at An Aird.

Meanwhile, Lochaber stretched their run to four games without defeat under new manager Robert Johnstone when they beat Kinlochshiel 4-2 at Balmacara.

In Drumnadrochit, Glenurquhart scored first when Fraser Heath found the net within the first 15 minutes.

However, two in two minutes from Fraser MacKintosh and Chris Sellar gave 'More a half-time lead.

When Danny MacRae made it 3-1 it briefly looked all over - until Neale Reid reduced Glen's deficit to a single goal.

MacKintosh then scored his second to bring the score to 4-2 amid complaints of poor defending from the Glenurquhart bench.

With Glen very stretched for players, their substitutes included both co-managers Drew MacNeil and Fraser MacKenzie. So, MacNeil responded by fielding himself at full-back and 'More's scoring ended, but the home side could not pull any goals back.

At An Aird, Gary Innes twice gave Fort William the lead but, on both occasions, it was cancelled out by Lewis MacNicol for Inveraray.

However, the single point was enough to lift Fort, who also have three games in hand, above Oban Camanachd on goal difference at the bottom of the table.

Lochaber's success at Balmacara, which follows two other wins and a draw in Johnstone's three previous games in charge, now puts them a healthy five points clear of the relegation zone.

It also consigns Kyles, who also have games in hand, to eighth place.

However, it was Shiel who got off to a flying start with goals in the first seven minutes from Finlay MacRae and Duncan Ach MacRae.

Zands Ferguson got one back for Lochaber before half-time and another after the restart, before further contributions from Kevin Ferguson and Ben Delaney won the game for Lochaber.

In North Division 1, Kilmallie's 3-0 success on Skye takes them four points clear of Beauly but with two more games played.

Bute missed out on a chance to go top of South Divsion 1 when they conceded a late equaliser at Strachur in a three-all draw.