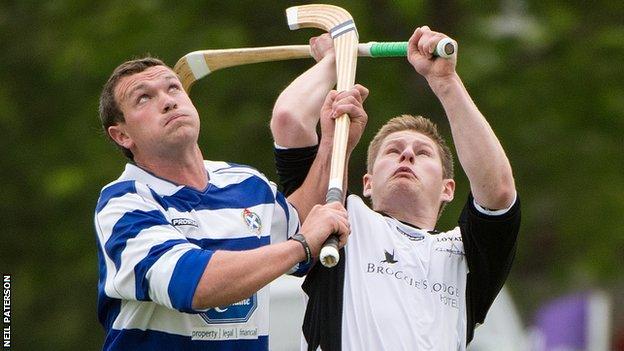 Newtonmore took another giant step toward lifting the 2013 Premiership title with a 4-2 win over Glenurquhart at Drumnadrochit.

More are now five points clear of there nearest contenders, Lovat, whilst also having a game in hand over the Kiltarlity team.

Lochaber's new-found form continued under new manager Robert Johnstone with an impressive 4-2 away win over Kinlochshiel.

Fort William hosted Inveraray at An Aird in glorious sunshine.

To avoid confusion, Fort changed from their customary yellow and black to white strips as both clubs play in the same colours

After Fort's win away to Glenurquhart the previous week, spirits were high in the home camp. This was enhanced after 35 minutes when Gordy MacKinnon pulled the ball out of the air and I volleyed it past 'Toad' in the Inveraray goal.

However, Inveraray levelled the match after some controversial refereeing.

The man in black, David Mitchell, had told the players they were not five yards away when the free hit was taken, however, when Inveraray's Lewis MacNicol pounced first and scored, somehow the goal stood!

Fort William went on to dominate the second half and a further goal from myself gave Fort the advantage.

The crossbar then came to the rescue of Inveraray for the second time in the match to keep the differenece in scoreline to just one.

However, on the 80th minute, a Lewis MacNicol shot from distance managed to work its way through the defence and past 'Felix' in the Fort goal to level the match.

As hard as Fort tried the winner was proving elusive, and, with seconds remaining, the ball landed at my feet from a duff hit out; I possibly could have snatched the winner if I had had both hands on my stick and not wiping the sweat out of my eyes.

That was my excuse and I'm sticking to it.

Earlier in the week I was coaching at the National Shinty camp at Strathallan, Perthshire.

This yearly camp gives today's youth in the sport the opportunity to develop their skills.

With top-class coaching from some of shinty's finest, alongside chats from sports psychologists, workshops, and a up close and personal chat from Scotland rugby legend Chris Paterson, it really was a fantastic week for all involved.

With Strathallan itself experiencing Scotland's highest temperature on Monday, it's a shame there wasn't an award for the best tan lines come the end of the week; however, this year's awards and winners were as follows:

Chris also went on to draw the 2013 Camanachd Cup semi-final which paired Kingussie with Kyles Athletic on 3 August, while Fort William face Newtonmore on 10 August. Venues are to be confirmed.

Looking ahead to this weekend's fixtures, in the Macaulay Cup semi-finals Inveraray take on Kyles Athletic from the South, while, in the North, Newtonmore meet Lovat, all hoping for the chance to grace Mossfield Park, Oban on Saturday 17 August.

Fort William face Lochaber at An Aird in a good old-fashioned Lochaber derby.

In all the years I've played shinty, Lochaber have been the underdogs when clashing head-to-head with Fort; however, due to recent form and movement within the An Gearasdan players, the Spean Bridge side will start as favourites for this one.

I will also be unavailable for this tie as my musical commitments now take me away for the rest of the season.

I always feel extremely fortunate that I have a job that I love and get to travel with; however, with Fort William experiencing their toughest season in decades, I can't help but feel guilty leaving at this time.

That said, if Lochaber were to get the win, getting away from the village and my little brother Shuggie - Lochaber's wing centre - would be no bad thing.

Even the village shop love giving me a good ribbing when Fort lose, never mind to the Spean men themselves!