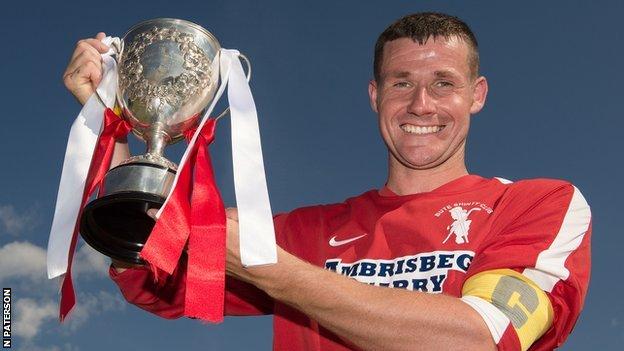 The MacAulay Cup final in Oban on 17 August will be between old rivals Kyles and Newtonmore who are also in separate semi-finals of the Camanachd Cup next month.

Both scored four in their MacAulay semis, although it was harder going for Kyles who were taken to extra time by Inveraray in Oban.

In the end Kyles prevailed 4-2 while a late goal rush for Newtonmore saw them dispose of Lovat 4-0 at Inverness.

Bute defeated Beauly, also 4-2 and also after extra time, to win the Balliemore Cup for the Scottish intermediate title.

Oban Camanachd came off the bottom of the Premiership with a 3-1 defeat of Kinlochshiel, consigning Fort William to bottom spot after their one-all derby draw with Lochaber. Kingussie went third with a 2-1 home win over Glenurquhart.

After a goalless first half in the Macaulay tie in Oban, Inveraray went ahead twice through Peter MacIntyre, and then Russell MacKinlay after Robbie MacLeod equalised.

Dunky Kerr's goal for Kyles took it to extra-time where Roddy MacDonald and Thomas Whyte made it 4-2 for the Tighnabruich side.

For much of the North semi-final at Bught Park, Inverness the scoreline sat at a not completely irreversible 2-0, after first-half goals from Glen MacKintosh and Danny MacRae.

Lovat threatened several times early in the second half but MacKintosh completed his hat-trick in the last two minutes to secure a first final appearance for new Newtonmore manager Paul John MacKintosh.

The new boss has been at pains to point out that he has won no trophies yet, but now his side are in this final as well as the last four of the Camanachd Cup, whilst sitting five points clear in the Premiership with a game in hand.

In the Balliemore Cup Final at Ballachulish, Marc MacLachlan opened for Beauly in the first minute and Gordon MacMillan cancelled that out before that same cycle was repeated through Sean Stewart and Robert Walker.

An Iain Mac Donald penalty and Robert Whitelaw strike sealed the silverware for Bute in extra-time.

Kingussie's 2-1 success over Glenurquhart came from goals by Lee Bain and Bob MacGregor, before James MacPherson struck back late on.

Tempers may have been frayed in the Badenoch heat with Fraser Munro sent off for Kingussie and Eddie Tembo and Ewan Brady for Glen.

Honours ended even in the Lochaber Premiership derby at An Aird where Ben Delaney equalised for Lochaber in response to Daniel Stewart's strike for Fort William.

This means that Fort, with two games in hand, have gone back to the bottom after Oban Camanchd's 3-1 home defeat of Kinlochshiel.

Camanachd rushed to an early 3-0 lead from Gussie Campbell, Lewis Cameron and Gavin Stobbart in the first 12 minutes.

Keith MacRae responded for Sheil in the second half. This means that the Balmacara side remain fifth in an intriguing battle where just four points separate the middle four in the table.

In North 1, the sometimes uncertain battle between Skye and Caberfeidh for the third avaliable place in next season's controversial National Division 1 continues.

It took another turn when Caberfeidh came back to win 4-3 against struggling Inverness who had built up an improbable 3-1 lead. Ali MacLennan scored all four for the Strathpeffer side.