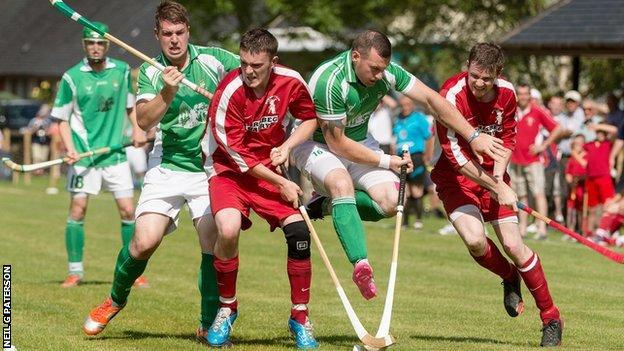 In blistering heat across Scotland at the weekend, it was derby day in the Orion Group Premiership between Lochaber and Fort William.

With only 10 miles separating the two Lochaber area clubs, bragging rights and, more importantly, league points were the focal point in this match-up.

It was Fort who found the net first after 18 minutes through Daniel Stewart. Lochaber went on to equalise on the stroke of half-time to level the tie at the break.

With no more goals or last-minute heroics, the game finished 1-1 with the points shared.

Kingussie continued their winning streak ahead of their Camanachd Cup semi-final with a 2-1 home win over Glenurquhart. Lee Bain and Bob McGregor had Kings two ahead before a 90th-minute consolation from James MacPherson for the Drum men.

Oban Camanachd stormed to a 3-0 lead in under 12 minutes over Kinlochshiel at Mossfield. Iain Campbell, Lewis Cameron and Gavin Stobbart all scoring for the home side.

Shiel's Keith MacRae pulled one back in the second-half for the North visitors, Camanachd held on to a 3-1 lead to secure both points.

In the Macaulay Cup semi-finals, Newtonmore dismembered Lovat 4-0, while Kyles Athletic joined them in the final after a 4-2 extra-time win over Inveraray.

The final will be televised live on BBC Two on Saturday 17 August from Mossfield Park, Oban.

Bute defeated Beauly 4-2 after extra-time to lift the Balliemore Cup in shinty's First Division competition. Bute skipper Iain MacDonald was first to score in extra-time, followed by another strike from David Whitelaw to ignite the party atmosphere on the island.

It was the 30th Anniversary Joe Toal Sixes tournament on Sunday which takes place each year in Spean Bridge, the village Joe was from.

This six-a-side tournament is in memory of Joe who, in 1982, aged only 22, died suddenly on the field playing for Lochaber against Fort William.

Fittingly enough, it was a Lochaber team who won the trophy this year, however it was neither of the two mentioned already, but Kilmallie who were crowned champions after defeating Newtonmore in the final.

As a child growing up in Spean, the Joe Toal Sixes were one of the highlights of your summer holidays.

If you were lucky enough to be selected you also got to be a ball boy for the day, which came with free burgers, coke and a £5 for your effort.

It was also your big chance to stock up on shinty balls for the following year, but you had to be canny and hide them in places where no-one would find them till you collected them the next day.

Looking ahead to this weekend's action, in the Premiership, Glenurquhart take on Inveraray, Lovat host Kingussie and Newtonmore tackle Oban Camanachd.

Fort William have home advantage at An Aird over Kyles Athletic.

Fort lost heavily earlier in the season at Tighnabruaich; however, Kyles often struggle when away from home due to players' work commitments so it's unpredictable as to what kind of squad will head to the Highlands this weekend.

Fort are still in desperate need of points if they wish to stay in the Premiership and know a home win over Kyles would be a huge boost towards their goal of survival.