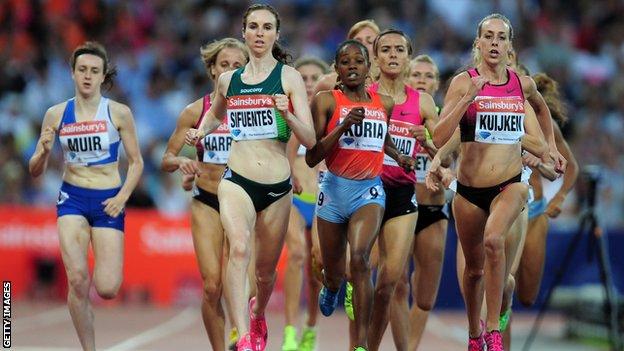 Scottishathletics' chief executive Nigel Holl says some clubs in Scotland have doubled in size since last year's Olympics in London.

"I give an enormous amount of credit to all our clubs in Scotland for coping with the post-Olympic surge."

I don't just credit the Olympics for that, I reckon the Commonwealth Games in Glasgow is a big part of it

Holl spoke after five Scots took part in the London Anniversary Games on Friday, with Eilish McColgan running a personal best in the 3000m.

"I don't just credit the Olympics for that, I reckon the Commonwealth Games next year in Glasgow is a big part of it.

"Clubs will tell you that, in some cases, their membership has gone from the 140 mark to over 300 - they've virtually doubled in size in the last 12 months.

"That puts quite a considerable strain on the volunteers that run clubs, but they've coped exceedingly well.

"We've got to make sure we keep those young people in the sport and you only do that if the opportunities are exciting, fun, the competition's right and there's great coaching."

It could be that Glasgow catches a glimpse of the likes of Friday's 100m winner Usain Bolt before the Commonwealth Games.

An announcement on a possible Diamond League athletics meeting at Hampden next summer is expected in around a fortnight.

"It would be enormous," Holl said. "A one off chance for us in Scotland to have a Diamond League because we'll have Hampden set up in the way we saw the Olympic Stadium.

"It's all speculation, but fingers crossed."