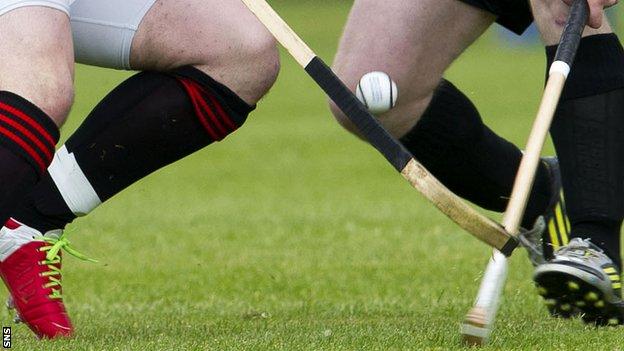 Ballachulish scored twice in extra-time to beat Lochcarron 3-1 and lift the Aberdein Considine Sutherland Cup for the Scottish reserve team championship at Farr near Inverness.

This means that all four major shinty finals to date this season have gone to extra time.

It is 'as you were' both at the top and the bottom of the Orion Premiership with victories for the two pacemakers and defeats for both stragglers.

Newtonmore took another step towards a fourth consecutive title with a massive 7-0 home win over Oban Camanachd.

And Fort William remain bottom after Kyles twice came from behind to edge them 3-2 at An Aird.

Michael Slezas drew first blood for Ballachulish in the first half of the Sutherland final before Crisdean Finlayson's equaliser sent the game to extra time. Scott Henderson and John MacDonald then sealed the honours for south shinty's most northerly side with goals in each half of extra time.

The MacTavish, Glasgow Celtic Society and Balliemore Cup finals have all already gone to extra time this season.

A few years ago both Ballachulish and Lochcarron opted to reduce from two teams to one and only to play reserve standard shinty in the junior leagues and cups.

This has raised questions following their progress to this final but Camanachd Association President Archie Robertson has said that this is entirely within the rules and also, he believes, acceptable if used as a springboard towards revival.

At The Eilan, Newtonmore overhwelmed Oban Camanachd, whose Gareth Evans opened the scoring with an early own goal. After that it was pretty regular traffic as Scott Chisholm, Danny MacRae, Rory Kennedy, John MacKenzie and Fraser MacKintosh twice, piled on the goals for the champions.

At Balgate, Kiltarlity, Kevin Bartlett put Lovat ahead but Kingussie's Thomas Borthwick levelled just before half time in advance of Lorne MacKay's winner in 67 minutes.

However Camanachd's heavy defeat doesn't put them bottom since they remain a point clear of Fort William after their defeat by Kyles at an Aird.

It might have been very different when Daniel Stewart put the Fort ahead, and then again after Roddy Macdonald equalised. Matthew MacColl made it two all before Grant Irvine, in the penultimate minute, scored the goal which gave Kyles the points and condemned Fort to remain bottom.

Glenurquhart move up to fifth with a 2-1 defeat of Inveraray in Drumnadrochit. Neale Reid put the home side in front before Peter MacIntyre equalised for Inveraray and Glen's winner then came from Allan MacDonald in the second half.

Kilmallie are now six points clear in Marine Harvest North Division One but with two extra games played after a 1-0 home success over their only challengers for the title Beauly. Martin Munro scored on the half hour.

These two look certain to be in the revived National Division One next season with the third place up for grabs between Skye and Caberfeidh who met in Portree.

The apparent reluctance of many clubs to go national was perhaps reflected in the score remaining blank until Craig Morrison edged Skye for the moment into that third place with a last minute penalty.

Skye are a point ahead of Cabers who have two games in hand. Skye led the unsuccessful campaign against the league reforms earlier this year, stating that they were unhappy about the amount of travel a National Division One would entail.