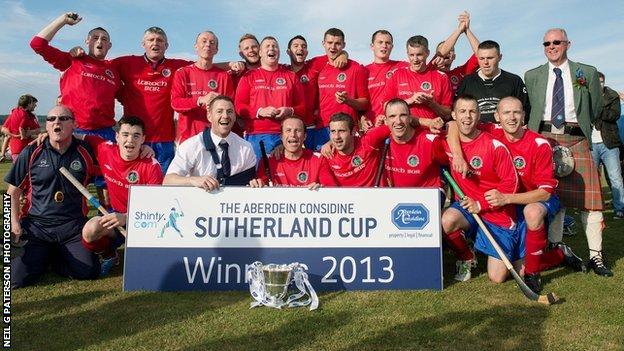 In shinty's Premiership, Newtonmore were in seventh heaven when they met Oban Camanachd at the Eilean and thumped them 7-0.

Glenurquhart sealed two league points over Inveraray at Drumnadrochit after 'Glen's Allan MacDonald added to an earlier goal from Neale Reid. Peter Macintyre scored for the Inveraray side, however with no more goals the match finished 2-1.

Lovat made good use of their home advantage at Kiltarlity over Kingussie with a 2-1 win against the Badenoch club. Kevin Bartlett and Thomas Borthwick had the game all square, before Lovat's Lorne Mackay's second-half strike secured victory for Lovat.

Fort William welcomed Kyles Athletic to An Aird in search of desperately needed points to lift them off the bottom of the Premiership, and when Fort's Daniel Stewart scored after 13 minutes, things were looking up. Kyles marksman Roddy Macdonald, however, went onto level for the visitors, before Stewart once more put Fort ahead just before half-time.

In the second half, Matthew MacColl equalised for the Tighnabruaich side and with no more goals, a share of the points looked on the cards, until, with less than a minute remaining, Kyles Athletic's Grant Irvine became the hero with a late goal.

This will be a bitterly disappointing blow to the Fort William team who have struggled to finish teams off all season.

In the juniors, the Sutherland Cup final was played out between Ballachulish and Lochcarron. Michael Slezas opened for Balla, before Lochcarron skipper Croisdean Finlayson levelled on 59.

With the fourth consecutive cup final this season going to extra-time, it was Ballachulish who raised their game, scoring once in each half through Scott Henderson and John Macdonald to lift the silverware.

Looking ahead to next weekend's fixtures, in the Premiership Inveraray take on Kinlochshiel, while Lochaber challenge Oban Camanachd.

Fort William have home advantage over Glenurquhart at An Aird.

This is without question a do or die game for Fort William. If Fort cannot manage both points from this fixture it's hard to see where they are going to manage to collect enough points to sustain Premiership shinty in 2014.

Fort supporters' eyes will also be on the Lochaber v Oban Camanachd game as to where the points will lie, if a victory was secured.

Kyles Athletic 'never give up' attitude was highlighted in last year's Camanachd final after fighting their way back from 3-0 to beat Inveraray and they will be raring to go in their bid to retain the trophy.

Kingussie however have their and shinty's, most prolific scorer, Ronald Ross, back to try and get their hands on shinty's most prized possession. Kingussie last lifted the trophy in 2006, and a win for them could potentially set up an all Badenoch final again like we saw in 2011.